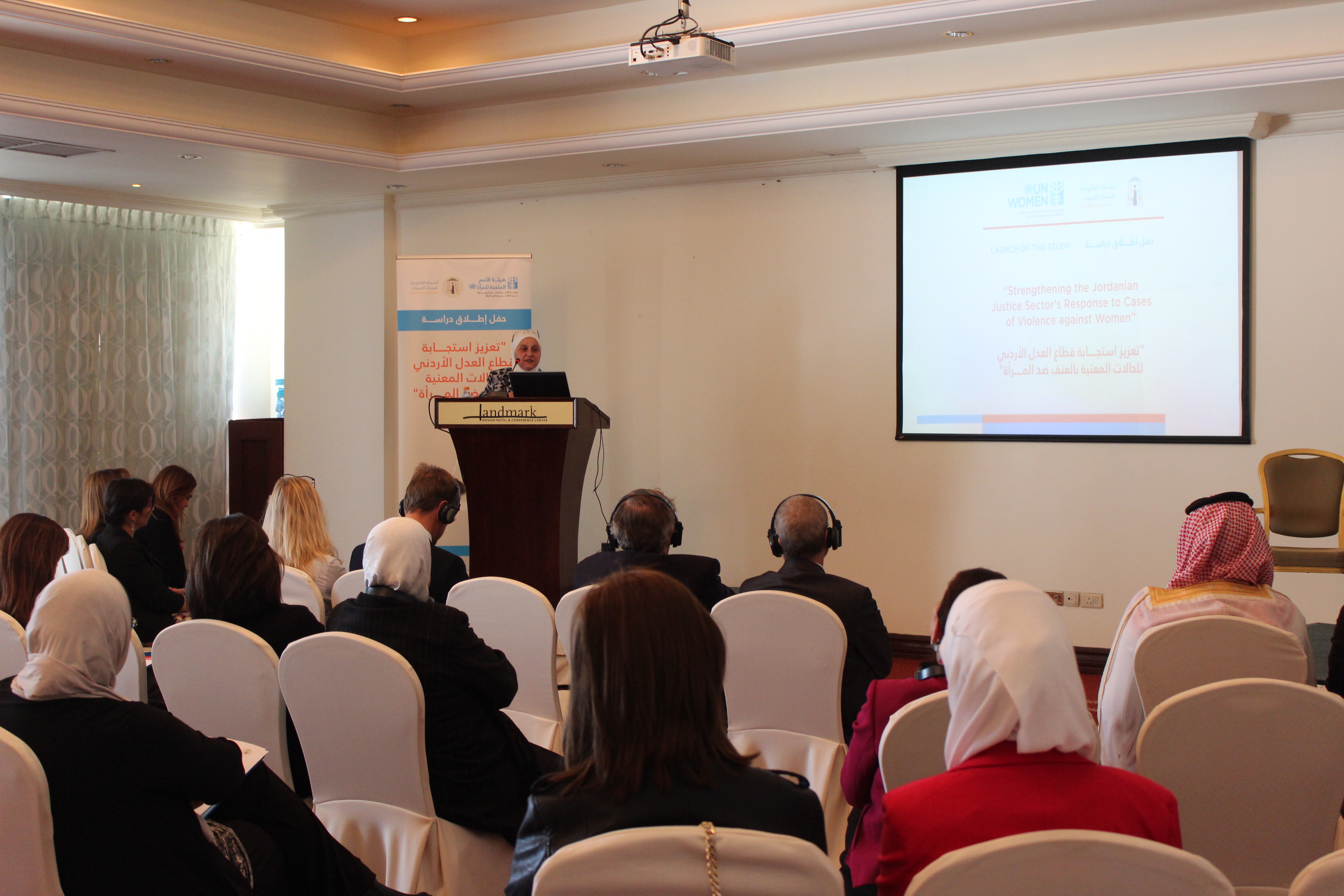 UN Women launched today the study ‘Strengthening the Jordanian’s Justice Sector Response to cases of Violence against Women’. One of three women in Jordan are victim of physical violence at least once since the age of 15 and nearly one in ten women have experienced sexual violence. Developed in collaboration with the Arab Women Legal Network, the study analyses how the justice sector currently responds to cases of violence against women, and how survivors of violence perceive and experience seeking legal redress through the Jordanian justice system.

Despite progresses, the report reveals that societal pressures to reject a claim of violence against women persist within the justice system. The lack of standard operating procedures and the uneven understanding of women’s vulnerabilities emerged as challenges in the management of complaints of victims of violence.

‘Doing justice for the victims of violence is not only a core legal principle but also the first step to build a fairer and more equal society. As UN Women, we stand ready to support those who are at forefront of this process, building the capacity of the justice sector in ensuring a predictable and timely assistance to the victims and easing their difficult journey of recovery’ affirmed Mr. Giuseppe Belsito, UN Women Jordan Representative.

The study also shed light on those inhibiting factors preventing victims from seeking legal assistance, such as the lack of information about procedures and societal stigmatization. According to trends identified, only 3% of victims of gender-based violence would seek support from the police after experiencing violence. On the other side, support received by immediate family members and friends – as well as higher awareness on legal tools and trials – are considered encouraging factors in victims’ access to justice.

Since 2014, UN Women Jordan is working in close collaboration with the Ministry of Justice, the Judicial Council, and the Judicial Institute - within the framework of the project ‘Hemaya’- in order to empower judges and legal practitioners in providing assistance to victims of violence.

Related News
31/03/2022
Empowering women and girls in Jordan to build more peaceful and inclusive societies
12/03/2020
Empowering women through innovation and technology
31/03/2019
From Where I stand: ‘We are a group of men who are ready to rise up against gender-based violence, stand up for women’s rights and spread the message to others.’
30/01/2019
Women’s centres in Jordan support refugee and Jordanian women
10/12/2018
Commemorating the 16 Days of Activism Against Gender-Based Violence 2018 Campaign, in Jordan.
END_OF_DOCUMENT_TOKEN_TO_BE_REPLACED