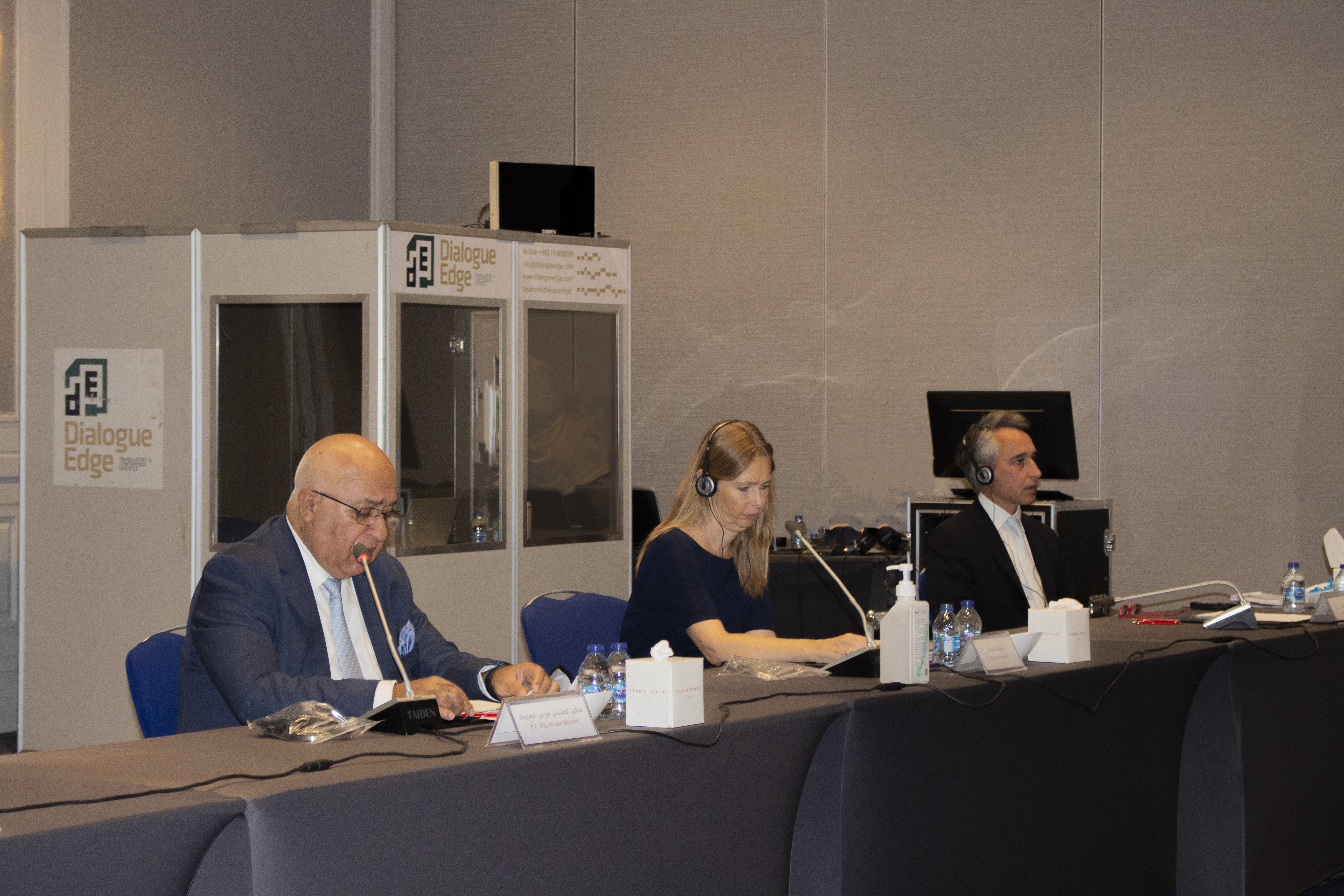 The Chair of the Inter-Ministerial Committee on Women’s Empowerment and Minister of Political and Parliamentary Affairs, H.E. Eng. Musa Maaytah, Norwegian Ambassador to Jordan, Tone Allers and the Representative of UN Women in Jordan, Ziad Sheikh at the National Forum to address the social and economic impact of COVID-19 on women. Photo credit: The Arab Renaissance for Democracy and Development (ARDD)

The Arab Renaissance for Democracy and Development (ARDD), in partnership with UN Women, held a national forum titled “Through Women’s Eyes” on June 27, 2021, regarding the implementation of UNSCR 1325 during COVID-19, in the presence of a number of experts, workers, representatives from civil society and relevant government agencies, to shed light on policy recommendations and lessons learned one year into the crisis.

The Chair of the Inter-Ministerial Committee on Women’s Empowerment and Minister of Political and Parliamentary Affairs, H.E. Eng. Musa Maaytah, addressed the forum, reiterating the government's belief in the role Jordanian women can play in the development and, specifically, in promoting security and peace, securing the protection of local communities. He stressed the importance of implementing UNSCR 1325, which assumes an even greater urgency now when the world has to deal with the impacts of COVID-19, and noted that the resolution tackles women’s participation in the military, peacebuilding and peacekeeping, humanitarian assistance and economic recovery efforts while, at the same time, protecting them in times of conflict and during transitional periods.

Maaytah said that initially, efforts aimed at fighting the pandemic and preserving people’s health, focused on fast responses to counter the social and economic consequences of the pandemic, especially on women. This included various decisions and measures taken to prevent domestic violence. The Minister thanked civil society organizations and supporting institutions for their contribution to handling the social and economic effects of COVID-19 on society.

The Chief Executive Director of ARDD, Samar Muhareb, highlighted the lessons learned over the past few months, including how the important role women, youth, civil society organizations, donors and the government played throughout the pandemic, and the need for evidence-based research to identify communities’ needs and help them in their journey to recovery.

Muhareb shed light on the value of partnerships and coalitions, such as JONAF, during crises and on women’s leadership in supporting and advocating for people, calling for the continuation of support to women affected by the pandemic.

The Representative of UN Women in Jordan, Ziad Sheikh, said that “Through the JONAP, civil society organizations ensured the voices of the most affected and marginalized populations informed and shaped relevant responses and monitoring of progress, strengthening their effectiveness and impact. This is critical as women’s experience in the realm of peace and security, particularly in times of fragility, is unique and may vary significantly.”

Norwegian Ambassador to Jordan, Tone Allers said that “The covid pandemic has shown us that women-led CBOs have a crucial role in responding to immediate needs and crises. They can influence policymaking at the community level, inform and make advocacy at the national level, and raise awareness among the donor community. It is therefore essential to build their capacity in evidence-based advocacy. The project implemented by the ARDD and UN Women and supported by the JONAP pooled fund donors Canada, Norway, Finland, Spain and UK is an important contribution.”

The Secretary-General of Jordanian National Commission for Women, Dr. Salma Nims, addressing women’s role in security and peace during times of crisis, commended JONAF’s work with women and its role in localizing and institutionalizing humanitarian work. She stressed the importance of implementing UNSCR 1325 and women’s role in combating violent extremism, building community peace and gender-sensitive responsiveness in times of crisis. She explained the need for initiating dialogue between the civil society and the government, and for understanding the challenges facing women during the pandemic. She also noted that this conference is an important preparatory consultation session for the development of Jordan’s second National Action Plan on UNSCR 1325.

The Assistant Secretary-General of the Ministry of Social Development, Mahmoud Al Jbour said that “the pandemic was an indicator to help to evaluate livelihoods and look forward to the future, as well as a live test with numerous lessons to learn.” He highlighted the role of civil society and the Ministry of Social Development toward the most vulnerable, saying: “During the pandemic, women’s role on the frontline of all essential sectors was prominent, especially the health sector.”

Senior research consultant at ARDD’s Al Nahda Center, Dr. Maria Mar Logrono Narbona, shed light on the research carried out by women leaders from various civil society organizations and the policy briefs reflecting their experiences in the field. She presented the main ways COVID-19 affected women, their families, and work in Jordan, and called on the civil society, donors and the government to collaborate to come up with plans to respond to crises, based on learned lessons, and to develop the capacity of the civil society.

Senior Consultant at Durrat Almanal for Development and Training, and JONAF Guiding Committee member, Dr. Sawsan Al Majali presented the coalition’s role in providing care, legal awareness, psychological and social support for women and other groups. She commended the role of the civil society in supporting the government's efforts, stating that CSOs can support with their expertise. She also emphasized the importance of collaboration between the private sector, donors and international partners to provide support and protection to the most affected groups such as women, children, the elderly, daily workers and refugees.

Participants discussed the economic challenges faced by women entrepreneurs, the deterioration of their businesses and the growing need for loans, and associated risks. Co-founder of and consultant at Women Helping Women Network, Nuha Muhreiz, said that the pandemic increased women’s share of work within their families and affected their home-based businesses, with their incomes drastically decreasing. She talked about several aspects related to the impact of the pandemic on different sectors, such as health, tourism, and agriculture, which forced many employees to exit both the formal and the informal labor markets. This also included the deterioration of women-led businesses such as home kitchens, beauty salons and shops due to the decrease in demand, lack of raw materials, fear of spreading COVID-19 and lockdowns.

The President of Women of the Villages in Al-Disi, Qutna Howeitat, said: “Women suddenly faced unexpected expenses due to the pandemic, as well unfamiliar responsibilities and unemployment.” Many women owing money receive warnings from lenders who threaten to kick them out of their houses or imprison them. Howeitat said women risk exploitation and manipulation when they seek loans from unofficial institutions.

The Vice President of the Women of Al-Talfileh Association, Maha Obaideyeen, talked about some negative coping mechanisms adopted by families to reduce the social and economic effects of crises, such as drastic reduction of health and food budgets. She added that these measures vary based on gender and nationality; for example, Syrian women sought them in higher percentages.

The effect of the pandemic on mental health, and the increase in the amount of unpaid work among women, were also discussed. The President of Madaba Cultural Forum for Children, Dr. Hiba Haddadin, said that women's mental health was affected by the pandemic due to lack of uncertainty, feelings of loneliness and isolation. She emphasized the importance of upholding the principles of good governance to address the consequences of the pandemic.

The President of Al -Karak Center for Consultancy and Training, Israa Mahadin, recalled the lack of quick solutions and elaborated on the status of the large percentage of marginalized groups lacking aid, which requires redefining social protection mechanisms: “Positive social protection mechanisms must include sustainable solutions for the vulnerable, such as the creation of job opportunities, while negative mechanisms, such as the provision of aid or cash assistance, are temporary”.

Concluding the forum, participants reiterated the need for enabling environments, supporting women entrepreneurs and small-businesses women owners, training women on the financial management of their businesses, reviewing Social Security laws for small businesses, and home-based projects to provide them support equal to that provided to big businesses. They recommended re-examining responses to community needs, translating response plans into actions, and paying greater attention to effective partnerships among civil society, the private sector and the government.

This initiative comes as part of ‘Strengthening Capacities of Women-led Civil Society Organizations on Evidence-Based Advocacy and the Women, Peace and Security Agenda’ implemented by ARDD in partnership with UN Women under the JONAP framework and with the generous support of the Governments of Canada, Finland, Norway, Spain and the United Kingdom.

Related News
20/10/2022
UN Women and GIZ, in collaboration with the Ministry of Labour, launch report on the impact of COVID-19 on the economic participation of women in Jordan
18/09/2022
From Where I Stand: “Looking forward, the most important thing for me is to keep growing and learning.”
31/08/2022
MINISTER OF FOREIGN AFFAIRS OF NORWAY, H.E. MS. ANNIKEN HUITFELDT, VISITS PSD IN AMMAN
19/08/2022
From Where I Stand: “Keep trying, once, twice, three times or more, as needed. The experience is worth it.”
09/08/2022
Participatory Workshop on Developing the Implementation Plan of the National Strategy for Women in Jordan (2020-2025) For Private sector signatory companies on the Women's Empowerment Principles (WEPs)
END_OF_DOCUMENT_TOKEN_TO_BE_REPLACED