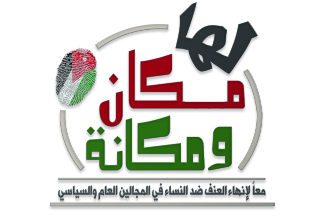 On Saturday, under the patronage of H.E. Wafaa Bani Mustafa, Minister of State for Legal Affairs and representative of the Inter-ministerial Committee for Women’s Empowerment,  the 2021 edition of the international campaign 16 Days of Activism Against Gender-Based Violence was launched under the theme “Together to end violence against women in the public and political spheres.”

During the launching ceremony organized by the Jordanian National Commission for Women (JNCW) and the Shama’a Network with the support of the UN in Jordan and Plan International, Her Excellency joined partners in the global stand to combat violence against women during the 16 Days campaign, while calling for increased efforts to enhance the protection of women and preserve their right to life and live in dignity.

She also emphasized the Government’s commitment to combating all forms of violence considering the positive impact it has on accelerating sustainable development, and building a healthy society in which all men and women can participate in the decision-making process.

Bani Mustafa also noted that there is a political support in Jordan, under the reign of His Majesty King Abdullah II, to promote the role of women and empower them in different fields.

In particular, she referred to the proposed legislative amendments to enhance women’s political life, such as the propositions of the Royal Committee for the Modernization of the Political System to the Constitution, which are being discussed in the Parliament. This includes the amendment to Chapter 2 of the Constitution in terms of adding specific references “Jordanian women”, as well as the addition of an item under Article 6 aiming to encourage women’s empowerment and protection from violence and discrimination.

She also recalled to the draft Election Law, which requires general lists for political parties to include women as well as to increase the number of seats for women appointed in local councils across all Governorates.

She explained that the Political Parties law includes dedicated provisions to  encourage women’s participation, emphasizing the importance of women and youth to access leadership roles in political parties. The draft Law also requires 20% of the party’s founding members to be women.

Her Excellency also recalled the societal and cultural challenge present among certain segments of that society that still challenge  women’s ability to exercise  their rights to live a life free from violence .

Dr. Salma Al-Nims, Secretary-General of JNCW, explained in her remarks that the 16 Days campaign is a starting point to effectively move towards combating discrimination and violence against women in politics. This year’s theme is the result of a specific study conducted by JNCW and its partners, that will continue to work on the issue in the upcoming year, intensifying joint efforts to promote the rights of women and girls in Jordan and to empower them.

Dr. Nims indicated that beyond the selected theme, JNCW continues to work on and raise awareness on all forms of violence against women, including economic and social violence, femicide and any discriminatory issues that women may face.

On that, she said: “The National Strategy for Women in Jordan 2020-2025 identifies ending violence against women as a priority area of action both at the national and governorate level. As such, JNCW will continue to work with all partners to combat all forms of violence against women and girls by focusing on legislative reforms, including the development of dedicated policies and plans, improving services, building and raising awareness, and changing discriminatory behaviors. Despite the multiplicity and diversity of forms of violence, its root causes are the same. Hence, JNCW works to strengthen positive power relations in the family and in the society to confront and end all forms of violence.

Dr. Nims presented the main findings of the study conducted by JNCW in 2021 on political violence against women, which served as the basis to identify this year’s theme for the campaign. She added that the findings are available to those who are interested.

“The United Nations joins our national partners in calling for zero-tolerance to violence against women in politics and we reaffirm our commitment as your partner to promote an enabling environment for women’s political participation in Jordan” said Mr. Ziad Sheikh, UN Resident and Humanitarian Coordinator ai.

In her remarks, the Director of Plan International, Ms. Muna Abbas indicated that women’s participation in the public and political life shall begin in the early years in order to raise girls’ awareness about their capacities and to increase their understanding in their right and  ability to interact in the public space without fear of marginalization and bullying.

Through its programmes, Plan International works with girls and young women to strengthen their leadership skills and to support them accessing leadership roles in different contexts. Plan International also works to increase societal awareness on the important role of girls, young women and women play in all fields and to break stereotypes and misconceptions about women's ability to participate, engage and positively influence the political life and public space.

The campaign will be rolled out through a holistic media campaign that leverages key messages and awareness raising material targeting all segments of the society to expand outreach at a larger scale. This includes visuals and video streams on social media in additional to thematic media products and audio messages that will be broadcasted on radio. More than 500 activities, sessions, workshops, and virtual events will be conducted by partners throughout across all governorates of Jordan.

The campaign will also include an online social media storm led by JNCW and its partners, titled “the Orange Hour”, which will take place on Saturday, 4 December at 8PM. This event is dedicated to share information relevant to the campaign, particularly with regards to political violence against women.

The 16 Days of Activism Against Gender-Based Violence is an international campaign which takes place each year and runs from 25th November, the International Day for the Elimination of Violence Against Women, to 10th December, Human Rights Day. The campaign is widely known as the “16 Days Campaign”, which is utilized as an organized strategy by individuals and organizations across the world to call for the prevention and elimination of violence against women and girls. The campaign initially launched by the Center for Women’s Global Leadership in 1991. Since 2007, Jordanian civil society organizations, JNCW, UN agencies and members of the international community joined efforts to support social mobilization in the Kingdom through the implementation of several events to raise awareness on gender-based violence.

Overview on the “Shama’a Network”