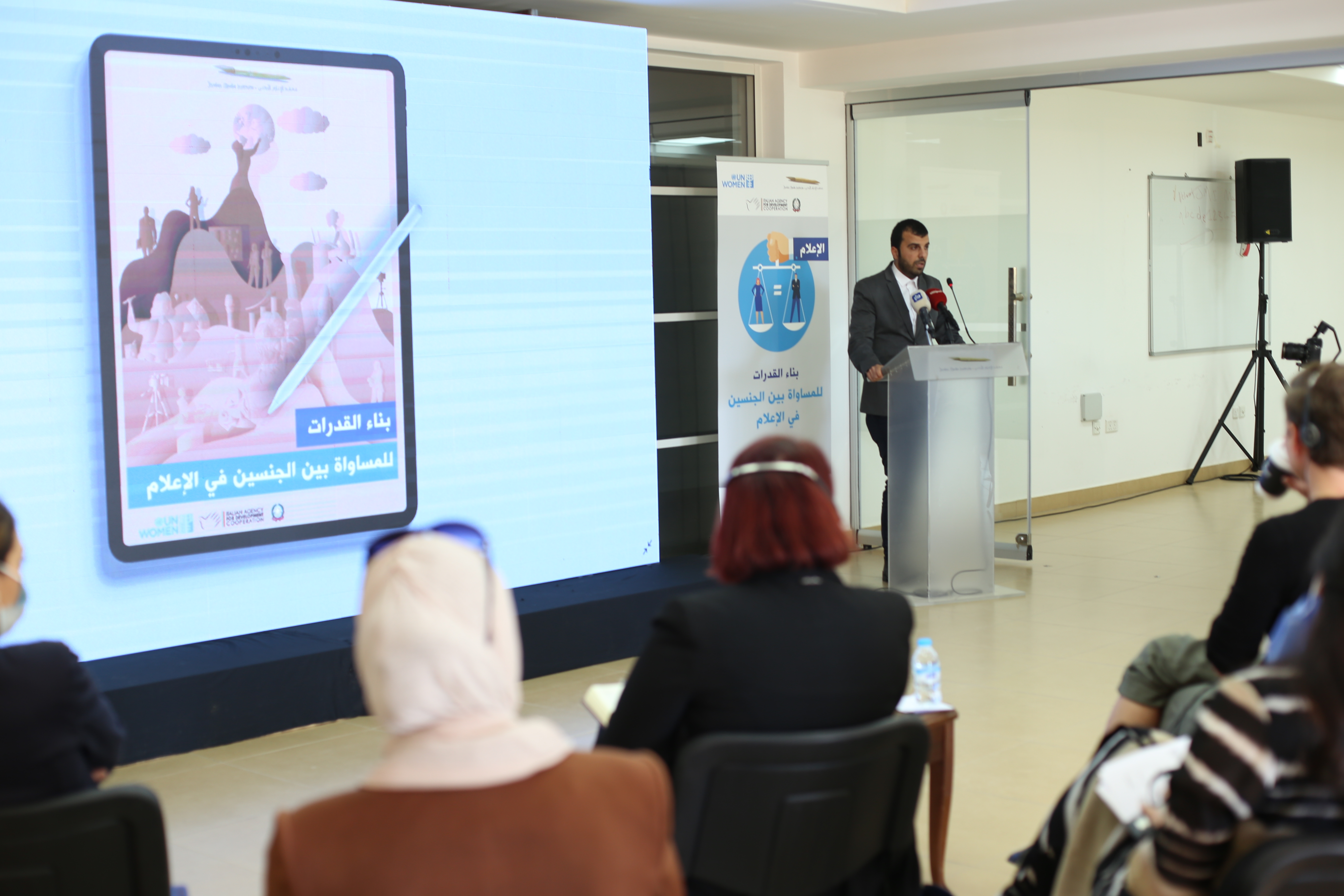 The Jordan Media Institute (JMI) concluded a project aimed at raising awareness and promote joint advocacy on gender-sensitive reporting on women in the workforce with the goal to foster an enabling narrative in the media for women in the labor market, shedding light on their expertise and vital contribution to Jordan’s economy. Implemented in partnership with the United Nations Entity for Gender Equality and the Empowerment of Women (UN Women) and the Italian Agency for Development Cooperation (AICS), the project focused on strengthening media and information literacy through gender-sensitive lens, while building the capacities of journalists and media professionals to produce gender-sensitive media content and to report on gender-based violence cases.

“The media plays a critical role in addressing and guiding the public perception on supportive workplaces that nurtures professionalism in lieu of traditional stereotypical gendering of qualifications,” said Dr. Mustafa Hamarneh, Chief Executive Officer of JMI. “The training was critical in promoting a greater sense of awareness in the narratives that foster an environment conducive to the empowerment of women as productive members of Jordan’s labor market” he added.

Through a comprehensive five-day training workshops on “Capacity Building for Gender Equality in the Media”, 65 journalists and media professionals, who were selected from a pool of applicants, were trained on how to apply gender-sensitive reporting tools and techniques to create media content that empowers women and promotes gender-equality in the workplace, with a particular focus on mainstreaming gender-responsive language.

"The partnership between the JMI and UN Women is fundamental to promote more gender responsive reporting on the role and impact of women in the public discourse. In this sense, the workshops organized by the Jordan Media Institute and UN Women are remarkable. They are taking into account the importance of the journalist role when report news regarding women and how it needs to be reported in a gender-sensitive way to create a new narrative. We are sure that the guidebook for journalists that launched by the JMI will have a relevant impact on the topic.” said Eleonora Banfi on behalf of AICS.

During the event partners launched a digital guidebook to support journalists and media professionals in covering gender-sensitive issues and gender-based violence, which is going to be available on JMI’s platforms. The guidebook includes tutorial videos, case study clippings, useful social and legislative information pertaining to gender sensitive reporting, and guidelines on covering related issues, such as the empowerment of women in the workplace through media coverage.

The Jordan Media Institute is a non-profit educational institution founded in 2007 by Her Royal Highness Princess Rym Ali to enhance the performance of journalists and media practitioners in Jordan and the region. The institute, which provides professional education and training opportunities, offers its programs in Arabic to raise the level of Arab media and provide foreign media outlets with professional Arabic-speaking journalists. For more information on the Jordan Media Institute, contact us at [ Click to reveal ] or visit us at http://www.jmi.edu.jo.

UN Women is the United Nations entity dedicated to gender equality and the empowerment of women. A global champion for women and girls, UN Women was established to accelerate progress on meeting their needs worldwide. For more information on the work of UN Women in Jordan visit: https://jordan.unwomen.org/en

AICS - the Italian Agency for Development Cooperation - is one of the key innovations established by the Italian law on international cooperation (Law No. 125/2014). The Agency began operating in January 2016, with the aim of aligning Italy with its principal European and global partners in the endeavor of development. Its basic model complies with the demand for more professional and innovative forms of cooperation, involving the methodological flexibility necessary in a continually changing environment https://amman.aics.gov.it/en/home/