Finding a new normal in the Za’atari refugee camp 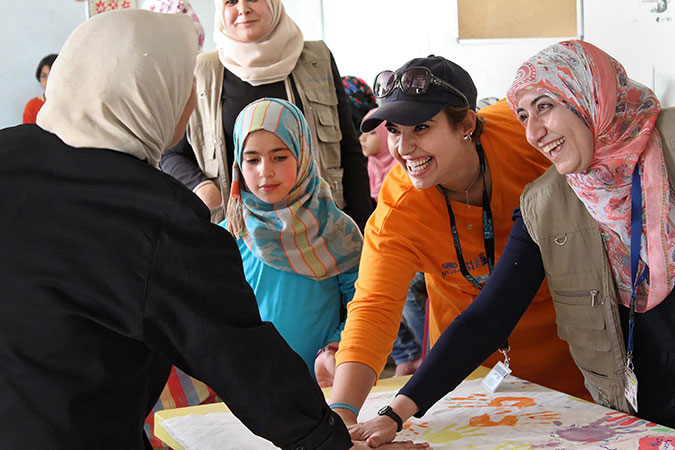 Of Syrian and Jordanian descent, Hadeel Al-Zoubi, 40 years old, is the UN Women Senior Camp Assistant at the Za’atari Refugee Camp in Jordan. She joined UN Women in 2013 because she felt compelled to help people caught in the Syrian refugee crisis.

Morning is breaking, it’s a little after 6 a.m. As the city of Amman wakes up, Hadeel Al-Zoubi, UN Women’s Senior Camp Assistant, is already on her way to the Za’atari camp, located over 65 miles from the capital of Jordan. The camp now hosts close to 80,000 refugees from Syria and neighbouring countries. At least 49 per cent of them are women.

The daily commute to the camp is a grueling two hours, each way.

“It’s not easy, being on the road for four hours every day,” Al-Zoubi confesses. “But, I love this work, and my time in the camp flies. Every day I learn something new.”

Al-Zoubi is half Syrian and still has family in Syria. Her work in the camp involves many nitty-gritties—planning project activities, ensuring that supplies are in place, and handling any number of expected or unexpected needs that may arise. Her cell phone often rings even before she reaches the camp. Today, it’s a call from a refugee woman who needs permission from the police to leave the camp for a day. Al-Zoubi will accompany her to the police station to get the requisite papers later that day. 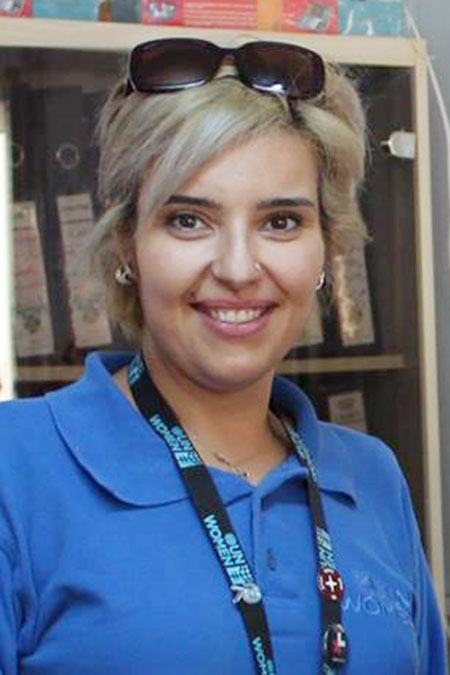 “I started working shortly after UN Women opened the Women’s and Girls’ Oases—which are safe spaces for women and girls where they can seek services and learn new skills. Initially, there was no electricity or internet; food and water was scarce. The refugees were suffering from fresh trauma, most of them had lost members of their families. There were daily disturbances in the camp.

I remember, last year, I arrived in the camp with chocolates for the children. I spotted this Syrian child who had developmental disability, sitting in front of my office. He looked unwell. I asked his mother what had happened to him…is he allergic to the chocolates that I had just distributed? I found out his medication had recently changed. I asked to see the medicine and it turned out that the mother had misunderstood the instructions and overdosed the child. I rushed him to the hospital and stayed with him in the intensive care unit all day. We could have lost him that day, but we didn’t.

I feel tied to these people. I understand their problems; I know what they feel…

We are just a small team that started with three people, but people across the camp know of us because our doors are always open. We are always there to offer a smile, some words, and this encourages the refugees to access our services.”

Arriving at the camp, Al-Zoubi greets everyone. She makes it a point to talk with all the guards and cleaners, many of whom work overnight. They too are refugees and have been hired through UN Women’s cash-for-work programme.

“UN Women provides many services for women refugees in the Za’atari camp—psychosocial support, awareness-raising on gender-based violence, literacy and computer classes, and cash-for-work programmes. The Oases stays open from 9 a.m. to 3 p.m. and provide female-only spaces where women and girls feel comfortable to come and access these services. Here, they can speak and learn freely.” 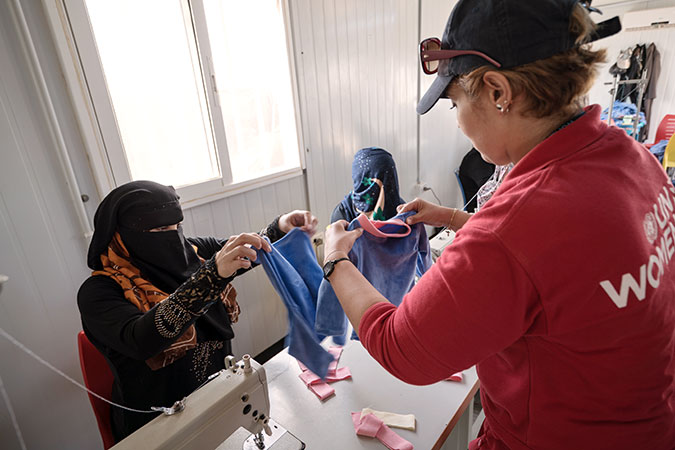 Hadeel, at right, leads the tailoring project, which is part of the cash-for-work programme, since she has a background in tailoring and fashion design. Photo: UN Women/Christopher Herwig

The cash-for-work programme is particularly critical, and has benefited around 275 women in 2016. Al-Zoubi leads a tailoring project in that programme. Today the women are producing baby kits for new mothers in the camp, distributed through a partnership with UNICEF.

“The tailoring project provides the women with a small haven inside a big, crazy world. When they take a break from tailoring, they laugh, joke and even dance.

Empowerment is not telling women what they need. I like to ask them what they want and need…and they should be able to make choices. Like, we asked the women refugees about what they needed in the baby kits. The new mothers didn’t want overalls, but pajama sets. So, we re-designed the baby clothes. 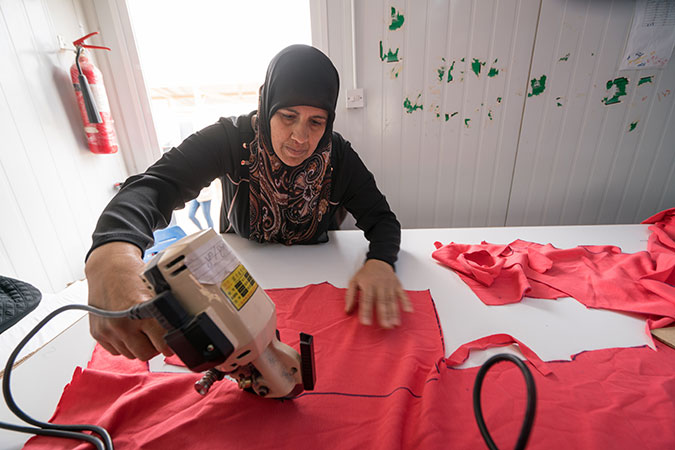 The biggest challenge for women in the camp right now is to find work. There are only 6,000 work opportunities in the camp, out of which 5,000 go to men. In each family, only one member can access cash-for-work. I have lost six women this year alone, because they preferred that their husbands worked. For female-headed households, lack of work opportunities makes the situation worse.”

In response to the needs of the community, UN Women recently launched the “business incubator” initiative in the Za’atari camp. This connects women who have completed the cash-for-work programme with opportunities outside the camp, and helps them in developing their own micro-businesses. 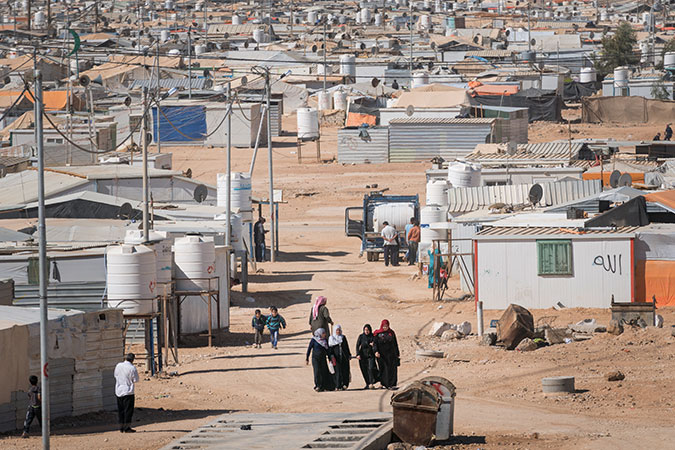 “I think the way they [refugees] have changed is that in the beginning, they lived day-by-day and hoped to go back to Syria. As the years passed, they started accepting this new reality. From tents on the ground, they moved into caravans; they created concrete bases for their caravans. They started seeking job opportunities and services.

A woman said to me the other day, ‘before, we slept under bombs. We went to bed not knowing if we would wake up alive the next day. Here, I sleep in safety.’”

UN Women set up two Women’s Oases in the Za’atari refugee camp in Jordan in 2012. The third Oasis was set up in partnership with World Food Programme in 2016. Several donors have contributed towards this work, including the governments of the Netherlands, South Korea, Finland, Iceland, Italy and Japan.The Oases offer a range of services along with the cash-for-work programme, including gender-based violence awareness trainings and referral services for women survivors of violence. They also provide literacy classes, skills training and day-care facilities. In 2017, UN Women started a new Oasis in the Azraq refugee camp, also in Jordan, which provides a healthy kitchen initiative with World Food Programme to improve nutrition for school children.