The conflict in Syria is in its eighth year, with devastating consequences. Inside Syria over 13.1 million people are in need of humanitarian assistance. Outside, 5.6 million registered refugees remain displaced from their homes across Egypt, Iraq, Jordan, Lebanon and Turkey. Of these, women and girls constitute 47.5 percent. While the Syrian refugee population is coping with the loss of lives, extreme poverty and unprecedented displacement, the crisis has also adversely impacted the development gains in the sub-region, where neighbouring countries such as Jordan, Lebanon and Turkey struggle to extend their social service structures to their expanding populations. Compounding this, instability in Iraq continues to challenge the socio-economic situation of the country.

Women and girls across the Arab States region continue to bear a disproportionate toll; not due to innate vulnerabilities, but due to historical and structural marginalization stemming from gender-based discrimination. This discrimination limits their access to employment and to public space and increases isolation and the risk of gender-based violence – both in Syria and outside. It also manifests itself through a growing number of female-headed households, who are one of the groups most vulnerable to food insecurity across the region.

Since 2015, the international community has increasingly shifted towards resilience-focused interventions, articulated through the Regional Refugee and Response Plans (3RP). Within the overall response to the crisis, the space for women’s proactive and meaningful participation has not been utilized to adequate scope and scale. This is despite the fact that the achievement of women’s empowerment and gender equality has the power to bolster recovery and peace. For example, in Jordan, the UN estimates that if employment occupations were reshuffled between women and men to ensure more equal distribution, the gross domestic product would increase by 5%, the equivalent of almost USD 2 billion per year. Moreover, data shows that women’s participation in peace-making makes peace more likely to be reached, and 35% more likely to hold for at least 15 years.

Supported by the EU Madad Fund, the two-year programme “Strengthening the Resilience of Syrian Women and Girls and Host Communities in Iraq, Jordan and Turkey” aims to strengthen the resilience of women affected by the Syria crisis. It works through a multi-dimensional strategy that enables women’s resilience and empowerment through addressing issues of economic vulnerability and violence. This is done by pairing increased access to recovery and livelihood opportunities, with comprehensive protection services and support to national justice structures to promote accountability for violence against women.

This programme also works to engage men as partners, champions and advocates for women’s increased empowerment, including their engagement in the labour market. In Turkey, the programme additionally seeks to promote a culture of peace and coexistence through women’s leadership in peacebuilding, reconciliation, conflict prevention and rights protection. 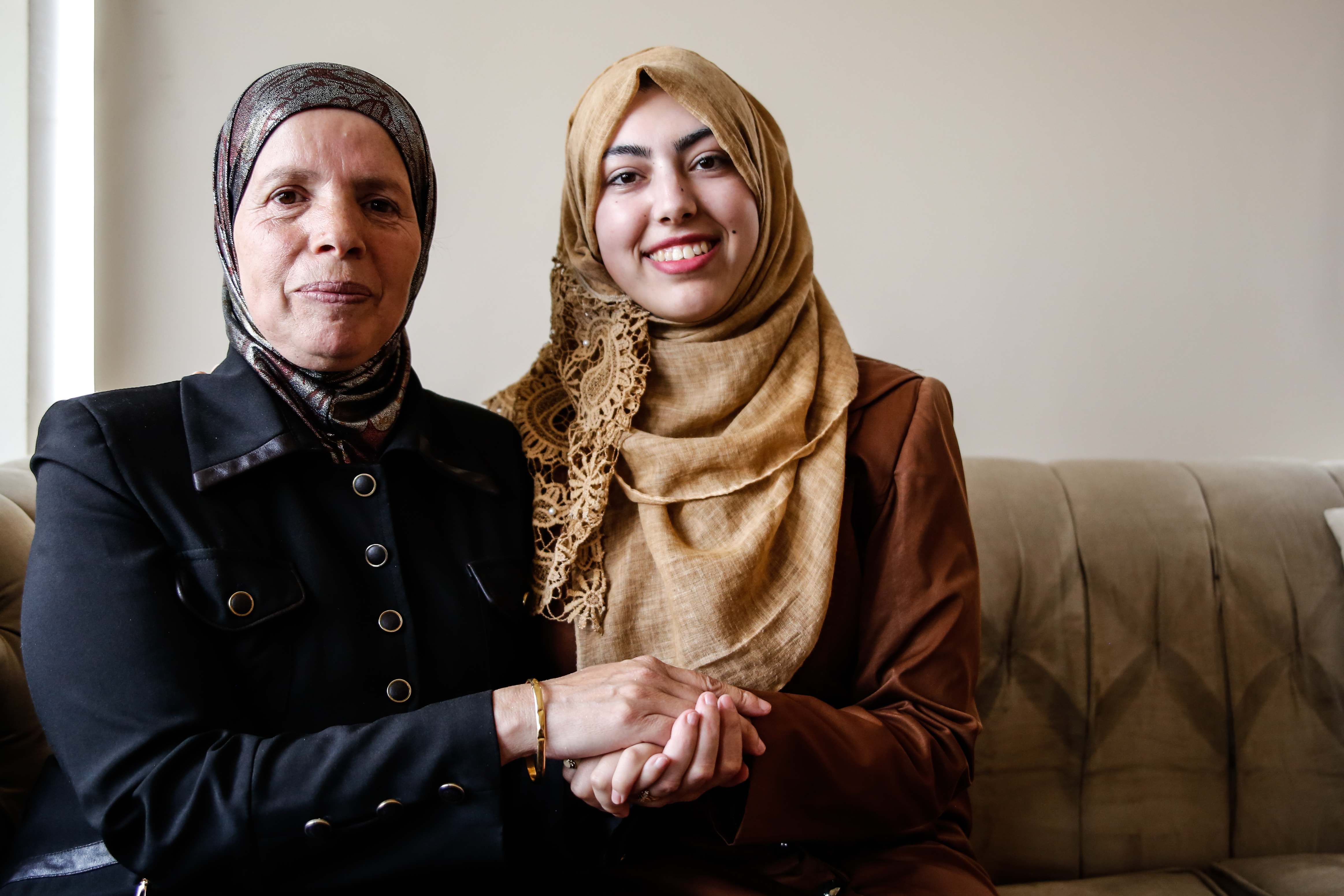 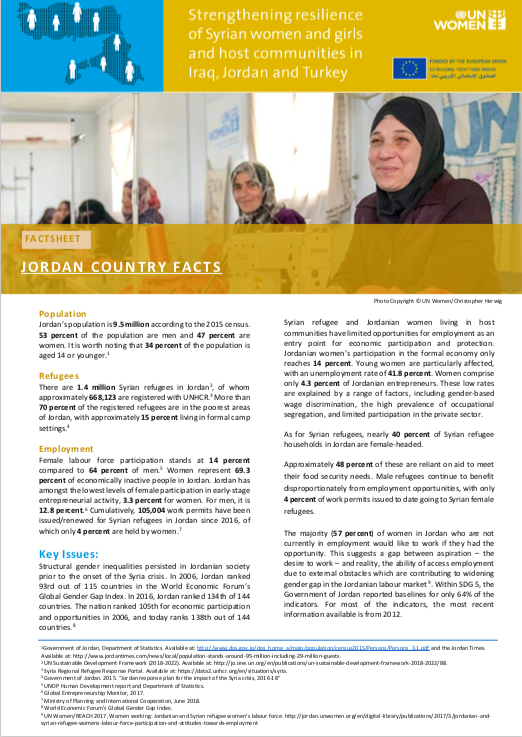 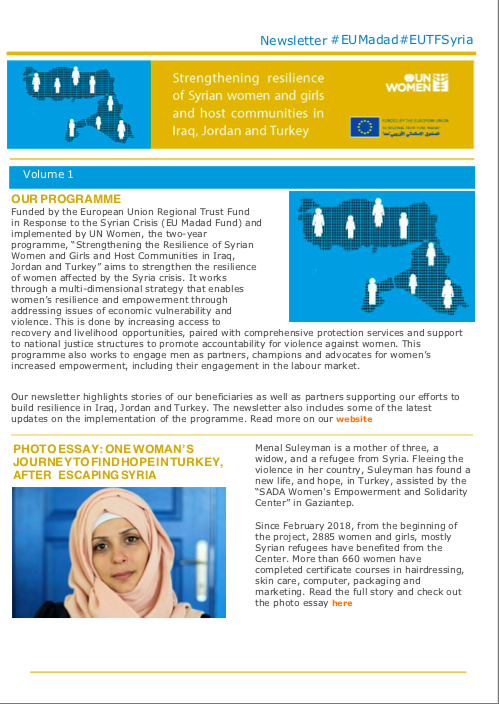 Five years into its creation, the EU Regional Trust Fund in Response to the Syrian Crisis has proven its added value beyond economies of scale and the pooling of funds. To date, the Trust Fund has mobilised over €1.9 billion, including voluntary contributions from 22 EU Member States and Turkey.

Large programmes focusing on education, livelihoods, health, protection, and the water sector – benefitting refugees, IDPs and local communities - have been approved by the Fund’s Board, for a total of more than €1.9 billion. Of this, more than €1.6 billion have been contracted in over 80 projects to the Trust Fund’s implementing partners on the ground, more than 4.3 million beneficiaries.

The European Union is made up of 28 Member States who have decided to gradually link together their know-how, resources and destinies. Together, during a period of enlargement of 50 years, they have built a zone of stability, democracy and sustainable development whilst maintaining cultural diversity, tolerance and individual freedoms.

The European Union is committed to sharing its achievements and its values with countries and peoples beyond its borders.

This brief provides an overview about the programme by highlighting its main objectives and roadmap for making a difference for Syrian women and girls and host communities in Iraq, Jordan and Turkey. More

UN Women and GIZ, in collaboration with the Ministry of Labour, launch report on the impact of COVID-19 on the economic participation of women in Jordan
From Where I Stand: “Looking forward, the most important thing for me is to keep growing and learning.”
MINISTER OF FOREIGN AFFAIRS OF NORWAY, H.E. MS. ANNIKEN HUITFELDT, VISITS PSD IN AMMAN
From Where I Stand: “Keep trying, once, twice, three times or more, as needed. The experience is worth it.”
Participatory Workshop on Developing the Implementation Plan of the National Strategy for Women in Jordan (2020-2025) For Private sector signatory companies on the Women's Empowerment Principles (WEPs)
END_OF_DOCUMENT_TOKEN_TO_BE_REPLACED