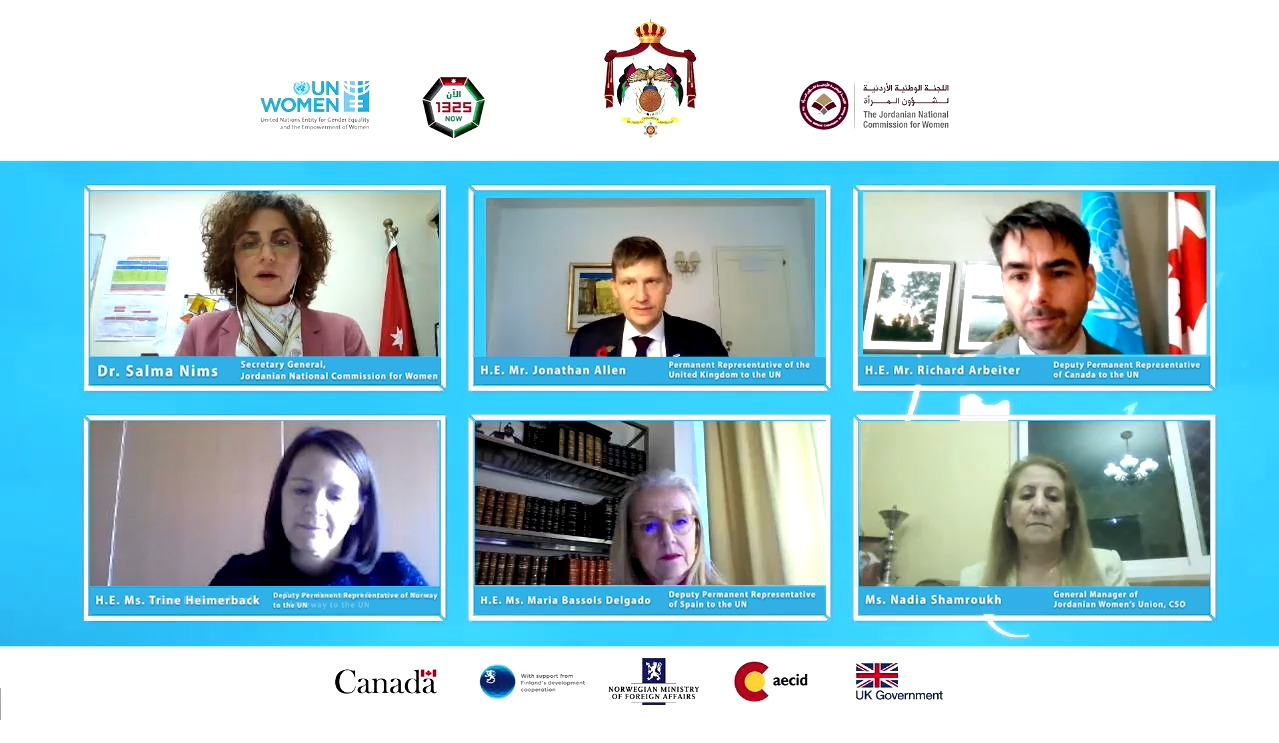 Participants during the discussion: Digital Side Event to Mark the 20th Anniversary of UNSCR 1325

The Permanent Mission of the Hashemite Kingdom of Jordan to the United Nations (UN), in partnership with the Governments of Canada, Norway, Finland, Spain and United Kingdom, hosted a side event on national leadership for the holistic implementation of UN Security Council Resolution 1325 at the margins of the UN Security Council annual Open Debate on Women, Peace and Security.  Organized with the support of the Jordanian National Commission for Women and UN Women, the event convened more than 100 national and international partners, including security sector agencies, civil society organizations, experts and media professionals, to present progress achieved in the implementation of Jordan’s National Action Plan on UNSCR 1325 (JONAP), as well as to discuss challenges and opportunities in promoting women’s equal participation and full involvement in all efforts related to maintaining and promoting peace.

H.E. Dr. Sima Sami Bahous, Permanent Representative of the Hashemite Kingdom of Jordan to the UN opened the event and noted that ‘Defining the intersecting goals of JONAP and the National Strategy for Jordanian Women (2020-2025) is pivotal to ensure the sustainability of the implementation of the agenda through capacity building and institutionalizing the relation between all relevant sectors: security, military, governmental as well as civil society organizations’.

During the event, participants acknowledged the JONAP as positive example of national leadership for the effective localization of the Women, Peace and Security agenda. Two years after its launch, significant results have been achieved across all its priority areas of actions thanks to national ownership, multi-stakeholder partnerships, and upfront national investments complemented by a dedicated pooled fund mechanism supported by Governments of Canada, Norway, Finland, Spain and United Kingdom.

‘With the progress achieved in the implementation of the JONAP, Jordan is an important example for other countries to follow. Gender-responsive budgeting, women’s representation in the security sector, gender-sensitive work environments, reformed education sector and wide inclusion of women in all sectors of society, are all important aspects to achieve not only the goals of UNSCR 1325, but the entire 2030 Agenda for Sustainable Development by year 2030’ said H.E. Mr. Jukka Salovaara, Permanent Representative of Finland to the UN.

Dr. Salma Nims, Secretary General of the Jordanian National Commission for Women, reaffirmed the role of the Government of Jordan, which has delivered on its commitments through the endorsement, launching, provision of financial allocations and by mandating the Inter-Ministerial Committee for Women’s Empowerment to oversee the work of the JONAP’s implementation.

As a result, an increase number of Jordanian women are serving in security sector agencies and are being promoted in leadership positions, survivors of gender-based violence have enhanced access to protection and legal services, and civil society organizations are leading community-based solutions in the crisis’s response and recovery efforts. This was further underscored following the onset of the COVID-19 pandemic, which has further exacerbated the situation of vulnerable women and girls.

‘Jordan has been recognized as a model for the localization of the Women, Peace and Security agenda, demonstrating its transformative impact and translating commitments into action. This was possible through strong national ownership and strategic partnerships. UN Women looks forward to strengthening our partnership on the JONAP‘ said Ms. Anita Bhatia,  Assistant Secretary-General and UN Women Deputy Executive Director.

This year marks the 20th anniversary of UNSCR 1325 on Women, Peace and Security, the first resolution that recognized women’s leadership and impactful role in achieving international peace and security and their contributions to conflict prevention, peacekeeping, conflict resolution and peacebuilding. On this occasion, Member States reconfirmed their commitments to realize inclusive, sustainable peace through the women, peace, and security agenda in the next decade. The side event provided an opportunity to share evidence-based results and best practices for Jordan’s holistic implementation of the JONAP.