The funding will provide emergency food and nutrition assistance, protection services and livelihood support for Syrian refugees and vulnerable Jordanians. 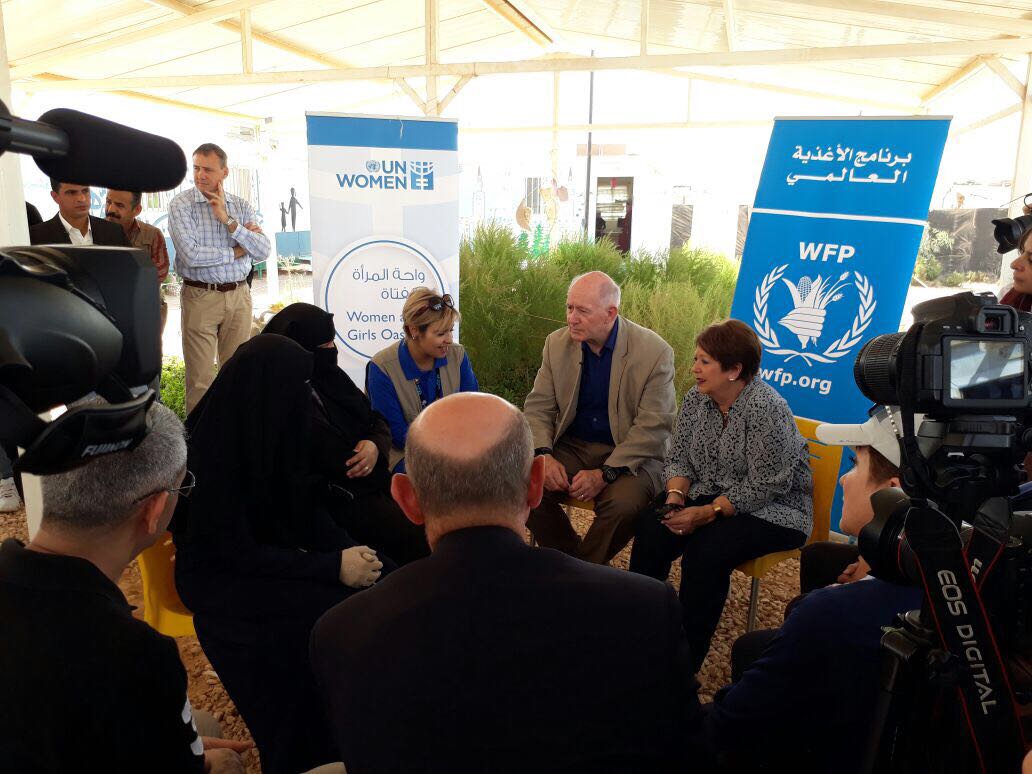 The Governor-General of the Commonwealth of Australia, His Excellency General the Honourable Sir Peter Cosgrove AK MC (Retd) and Lady Cosgrove visited Za’atari camp on Thursday, 19th October 2017. During the visit to one of the UN Women’s Oases and World Food Programme’s (WFP) kitchen facilities, the Governor announced his decision to donate 12.5 million in Australian humanitarian aid over the next three years in Jordan.

The decision initiated Australia’s partnerships with the United Nations Entity for Gender Equality and the Empowerment of Women (UN Women) and World Food Programme (WFP). The funding into these projects will provide emergency food and nutrition assistance, protection services and livelihood support for Syrian refugees and vulnerable Jordanians, with a specific focus on women and children.

“The Australian aid announced today will help make a difference in the lives of many here in Jordan,” the Governor-General said.-Governor-General, Sir Peter Cosgrove.

The announcement from the Governor-General and Lady Cosgrove was revealed during their visit to the camp, their tour began with visiting the WFP-run Healthy Kitchen in the refugee camp. The Governor-General observed the preparation of nutritious healthy meals for students at the camp schools. He then participated in the distribution of food at a primary school for girls in the camp, where he interacted with students on the importance of nutrition awareness and healthy eating habits. WFP complements the National School Feeding Programme, which supports over 350,000 schoolchildren aged between 5 to 12 years attending government schools in Jordanian communities.

The tour continued onto the UN Women, ’Women and Girls Oasis’ – one of the three safe spaces operated by UN Women in Za’atari camp, where the Governor-General met with Syrian women engaged in cash-for-work production of baby kits presented to new mothers in camp hospitals.  Enabling the chance for the Governor-General and Lady Cosgrove to learn about the specific challenges faced by women and girls in the camp, including access to livelihood opportunities, concerns regarding women’s safety and security, and the impact of isolation. Serving around 19,000 refugees per year, UN Women’s Oasis model seeks to address the immediate needs of Syrian refugees through livelihood opportunities, while also building their skills for finding longer term employment and providing support services such as child care, remedial education, and outreach and referrals for survivors of violence. Cash-for-work opportunities thus become an important entry point for women’s resilience and empowerment.

“Our partnerships with WFP and UN Women will reach beyond the camp to assist refugees and their host communities in urban areas. Australia is pleased to be supporting the Government of Jordan’s efforts in meeting the needs of all vulnerable people in the Kingdom.”-Governor-General, Sir Peter Cosgrove.

The humanitarian aid funding that the Government of Australia has provided will support UN Women’s Oases in Za’atari and Azraq camps to provide 150 daily cash for work opportunities to refugee women and 150 monthly child care spots. In addition, Australia will support a business incubator to be established in the Oasis to support refugee women to apply skills learned in cash for work opportunities to establish their own microbusinesses in their communities. The project will also support longer-term opportunities in Jordan’s hosting communities to provide sustainable employment for vulnerable Jordanian women in poverty pockets surrounding each refugee camp. Further more the support provided to WFP will provide General Food Assistance through e-vouchers to around 135,300 Syrian refugees vulnerable to food insecurity in both the camps and in host communities through the period 2017 – 2019.