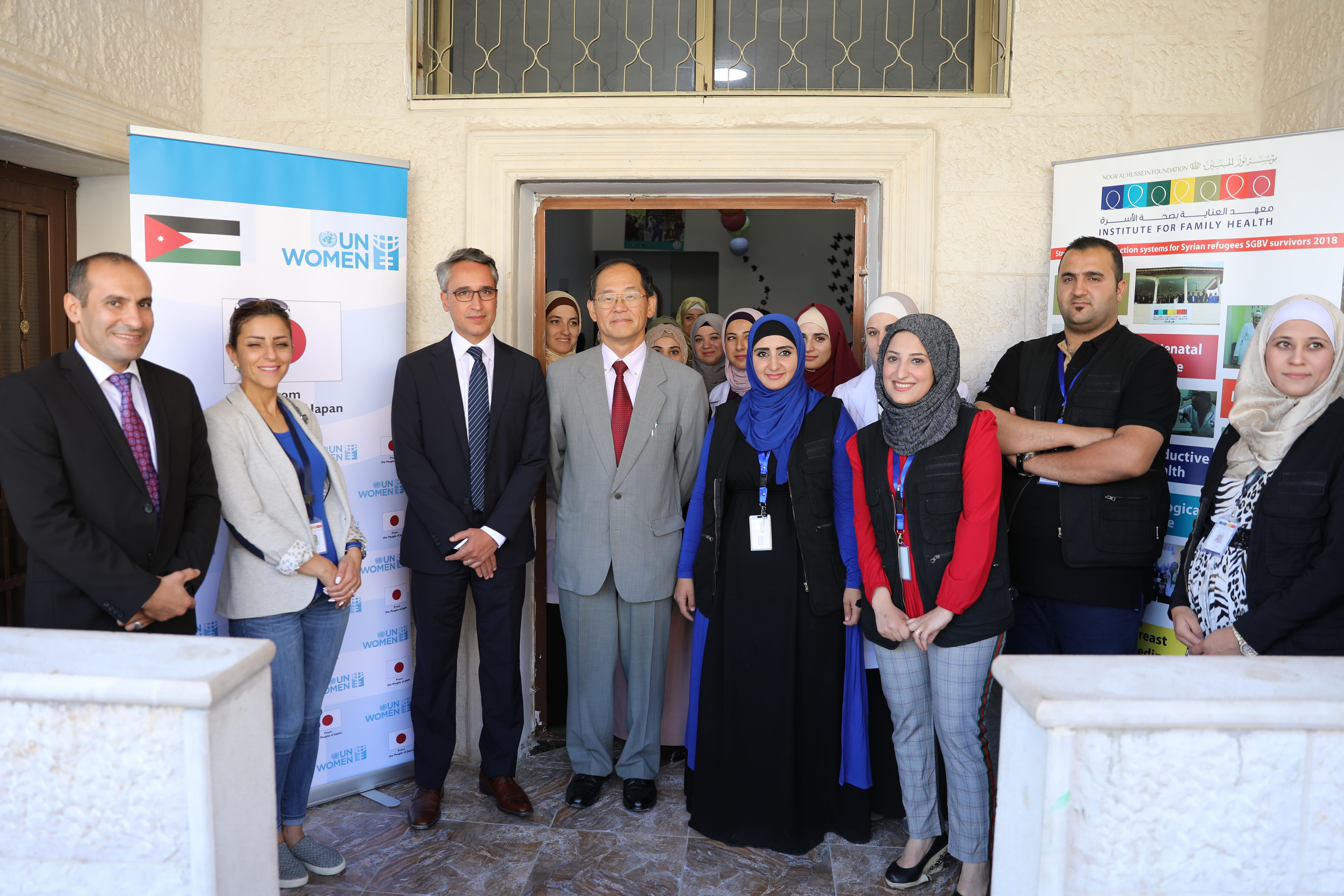 The Ambassador of Japan to Jordan, H.E. Mr. Hidenao Yanagi visited the women and girls’ center operated by UN Women and the Institute for Family Health (IFH) – Noor Al Hussein Foundation in the city of Ajloun. Along with another center located in the Governorate of Jerash, the Government of Japan, in partnership with UN Women and IFH, supports 6,000 vulnerable Jordanian and Syrian refugee women and girls with non-stigmatized protection, prevention and response services. During the visit, Ambassador Yanagi had the chance to interact with both service providers and women seeking counselling and health assistance in the center.

Ambassador Yanagi expressed in his remark, that “Japan highly appreciates UNWOMEN for their dedication and effort in providing various services to the Syrian refugee and Jordanian women in the field of women’s empowerment, protection, as well as health care including reproductive health and response to gender based violence. Japan attaches great importance to and has been assisting the activities of UNWOMEN in and outside of Refugee Camp in Jordan continuously since 2014, and the total amount of assistance has reached to approximately $ 7 million”.

Strategically located near the city’s bus station to facilitate access for women living in the remote areas, the center offers tailored services for survivors of gender-based violence as well as other medical and counselling services, such as antenatal and postnatal assistance, psychological support, and awareness raising activities. Youth engagement is another key dimension of the center’s outreach in the community. This encompasses the provision of life skills and recreational structured education courses for young men and women to strengthen community cohesion and personal growth.

“Community centers play a vital role in providing multi-sectoral protection services, where women and girls can find a safe space for counselling and to break the cycle of silence on violence and abuse.” affirmed Mr. Ziad Sheikh, the UN Women Jordan Representative. “UN Women addresses the multi-faceted issue of gender-based violence through a holistic approach in collaboration with its partners, where combined skills-building and awareness raising efforts contribute to the empowerment of vulnerable women and girls.” he added.

The visit to the center was preceded by a courtesy meeting with the Governor of Ajloun, H.E. Ali Al Majali, which provided an opportunity to discuss challenges and opportunities faced by women and girls in the Governorate. The support of the Government of Japan through UN Women and IFH in Ajloun and Jerash has been a sustained one. Under the UN Women’s regional project “Women’s Leadership, Empowerment, Access & Protection in Crisis Response (LEAP)”, around 9,500 Syrian refugee and Jordanian women benefitting from gender-based violence multidisciplinary services in 2017-18, with 6,053 women provided with health, legal and case management-related services, and 471 youth engaged in awareness raising efforts at the community level.