At 16 years of age, Maysam Hamed found herself in the women’s prison in Jordan. Her crime was that she had run away from child abuse at her father’s house, and had found herself on the streets, until the authorities took her in for administrative detention. What follows is a cycle of abuse that Hamed is finally able to break out of, with sustained support through a multi-sectoral joint programme by UN Women, UNICEF, UNFPA and the Jordanian Women’s Union. 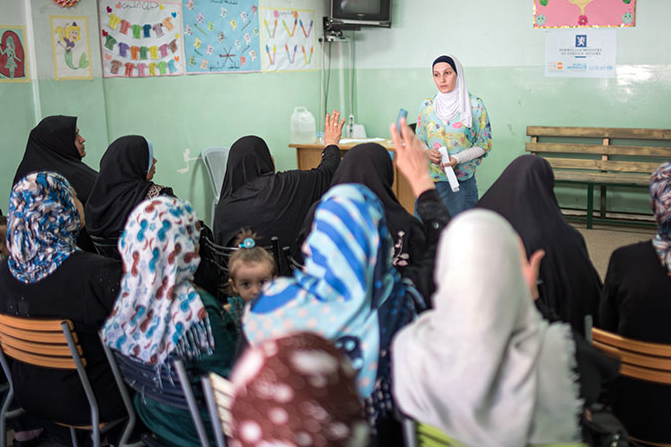 An awareness raising session on early marriage held at the Jordanian Women's Union center in Hitteen supported by UN Women, UNFPA and UNICEF with the generous support of the Kingdom of Norway. Photo: UN Women/ Christopher Herwig

“I was jailed at the age of 16. My charge? I was homeless because my family didn’t want me.”

That’s how Maysam Hamed*, now 37 years old, first found herself in crisis, and locked up in Al Jawaideh, the women’s prison in Jordan. Under Jordan’s Prevention of Crimes Act No. 7 of 1954, adults and minors can be detained if they are perceived as a threat to the community and to prevent crimes. Hamed’s crime was that she run away from child abuse at her father’s house, and found herself on the streets, until the authorities took her in for administrative detention.

“I heard about this girl kept in
prison with no criminal charges
and I immediately mobilized
our lawyers and specialists to
see how we could help. I even
went to her father’s house to get
his permission to release her
[as the law required] and I offered
to support her in finishing school,”
Nadia Shamrouk,
Jordanian Women’s Union (JWU)

“I heard about this girl kept in prison with no criminal charges and I immediately mobilized our lawyers and specialists to see how we could help. I even went to her father’s house to get his permission to release her [as the law required] and I offered to support her in finishing school,” shares Nadia Shamrouk, General Manager of the Jordanian Women’s Union (JWU), a national non-profit organization working at the frontline of supporting survivors of violence in Jordan.

“The authorities brought Maysam to my house at 1 a.m., and we celebrated together; it was such a relief. Back then, we had just started establishing shelters for survivors of violence and she was the first girl hosted in our centre,” added Shamrouk. “We used to take shifts to stay with her at night.”

For Hamed, the shelter was the first place where she felt safe and loved, and she started calling Shamrouk “Mama Nadia”.

Eventually, Hamed completed high school and went on to attend college. But her rehabilitation and recovery was short-lived. At barely 20 years of age, Hamed was raped by her friend’s brother, and her family forced her to marry her rapist to preserve the family honour.

After giving birth to her first son, Hamed focused on building a better future for herself and her children. She started working in the hotel industry and quickly rose through the ranks. However, her aspirations and career came to a halt when her husband lost his business and she went bankrupt covering his debt. Her husband continued to abuse her and eventually abandoned her. At age 37, Hamed found herself on the streets once again. 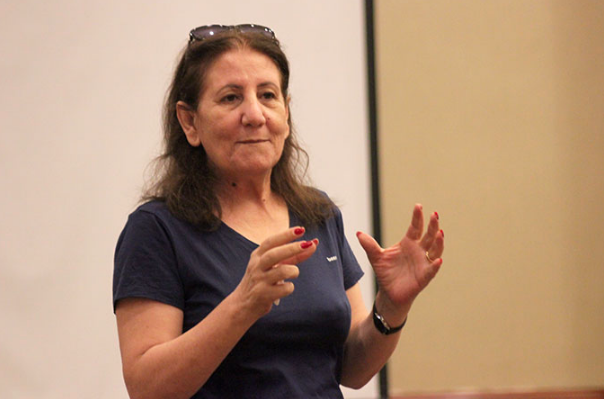 Nadia Shamrouk, General Manager of the Jordanian Women’s Union, a national non-profit organization supporting survivors of violence in Jordan established in 1996. Photo: JWU
“I had my three children with me. I had no place to go and no money to buy food to feed them I went back to the JWU shelter, but this time I was not alone.” she recalls.

After returning to the Jordanian Women’s Union shelter, Hamed and her young children received legal and psychological assistance. At last free from abuse, she now works at the women’s shelter as a secretary and has taken up acting—a hobby that has become a passion and is also a therapeutic outlet for her. Recently, Hamed performed with her son in front of King of Jordan, Abdullah II bin Al-Hussein.

Hamed’s experience shows the long-term and sustained support that survivors of violence often need, to break the vicious cycle of abuse.

Since 2015, UN Women in Jordan has supported Jordanian Women’s Union’s work in increasing access to live-saving protection services for sexual and gender-based violence survivors. “Witnessing the growing and renewed hope in the eyes of the women and girls whom we assist, is the best antidote to difficult and stressful times, when you feel overwhelmed by hundreds of cases and stories of abuse. We have been handling such cases since the establishment of the organization in 1996,” says Shamrouk.

“At Jordan Women’s Union, I never felt that
I was a burden or sick. They are and they
have always been my supporters. Whatever
will happen in my life, I know I can always
count on them.” - Maysam Hamed

“In our efforts to eliminate violence against women, we follow a comprehensive approach to prevent violence from occurring, while simultaneously offering prompt, non-stigmatized and professional services to support survivors in their healing,” says Ziad Sheikh, UN Women Jordan representative. “In partnership with Jordanian Women’s Union, we will be working to expand these services and support additional centres for women survivors to ensure that we are reaching the most vulnerable women in need.”

Funded by the Government of Norway, the joint programme with UNFPA, UNICEF, UN Women and the Jordanian Women’s Union, has provided assistance to more than 11,685 women, men, boys and girls last year through its eight women’s centres. They provide a range of services, such as health care, psychological and legal services and livelihood trainings and a 24-hour free hotline service for survivors of violence has also been set up under the programme.

Note: The name has been changed to protect the identity of the survivor.

Related News
10/05/2018
Minister of Social Development visits UN Women's Resilience and empowerment centers
12/03/2020
Empowering women through innovation and technology
20/06/2019
Photo essay: Syrian women in Jordan share stories of war and hope
31/03/2019
From Where I stand: ‘We are a group of men who are ready to rise up against gender-based violence, stand up for women’s rights and spread the message to others.’
10/12/2018
Commemorating the 16 Days of Activism Against Gender-Based Violence 2018 Campaign, in Jordan.
END_OF_DOCUMENT_TOKEN_TO_BE_REPLACED