From refugee camps to urban settlements and rural communities, Jordan has provided refuge to more than 1.3 million Syrians since 2011.1 Eighty-six per cent of Syrian refugees live below the poverty line and half of the refugee population are women and girls.2 In 2012, UN Women opened its first Oasis Centre in the Za’atari refugee camp as a safe space for refugee women and girls.

The Oasis model has evolved over the years into what is now a centre for building women’s resilience and empowerment through access to multi-sectoral services, while also engaging men and boys in dialogue and mobilization for social equality. UN Women now operates four Oases in the Za’atari and Azraq refugee camps and, since 2019, has opened an additional eight centres run in partnership with the Ministry of Social Development (in Zarqa, East Amman, Karak, Ma’an and Tafileh), targeting the most vulnerable women in Jordan – both Syrian refugee and Jordanian.

The women enrolled in the UN Women’s Oasis programme share their stories of escape from conflict and their journeys to becoming the empowered women they are today.

Falha Abrabo arrived at the Za’atari refugee camp with one hope: to find a safe place for her family. 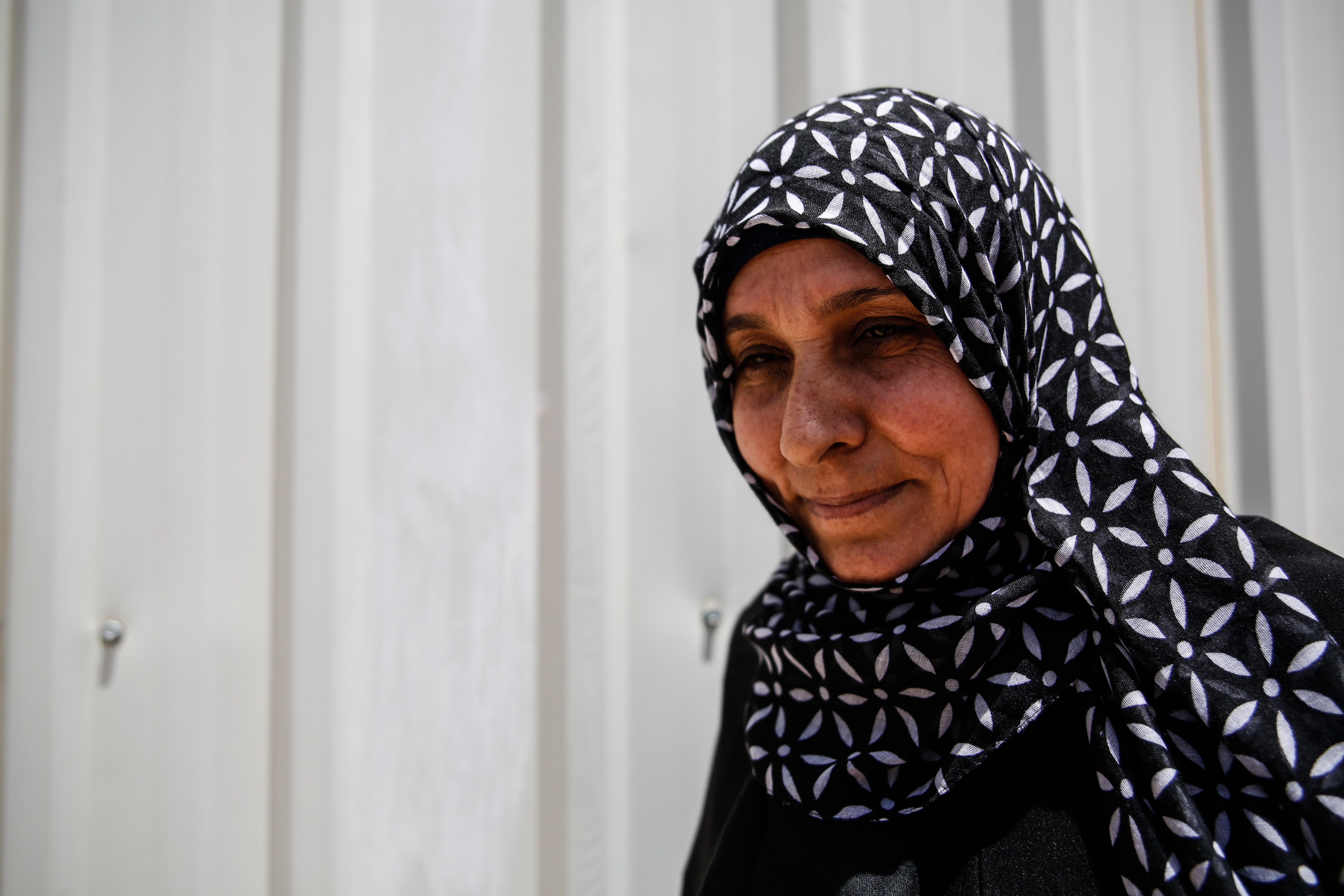 “The war destroyed almost everything that I had. I left Dara’a with my family in 2012. It was the only way that we would survive and have a future together,” says the 48-year-old mother of four.

The journey remains a vivid scar in my mind. The rain poured down, soaking our skin, sinking our feet and slowing us down. I remember thinking this must be the tears of all of the Syrians.”

The hardship for many Syrian refugees did not end when they reached Jordan. Falha became the head of her household due to the critical medical condition of her husband. Among the 30 per cent of female-headed households in Za’atari camp4, she was desperate to find work and earn money as the sole provider for her family.

Through UN Women’s incentive-based volunteer programme at the Oasis, Falha now earns an income as a literacy teacher. “The Oasis has given me the strength that I need to rebuild myself again,” she explains. “The position I have is much more than earning money. Not only am I learning new skills, but I have the opportunity to teach other women life-long skills.” 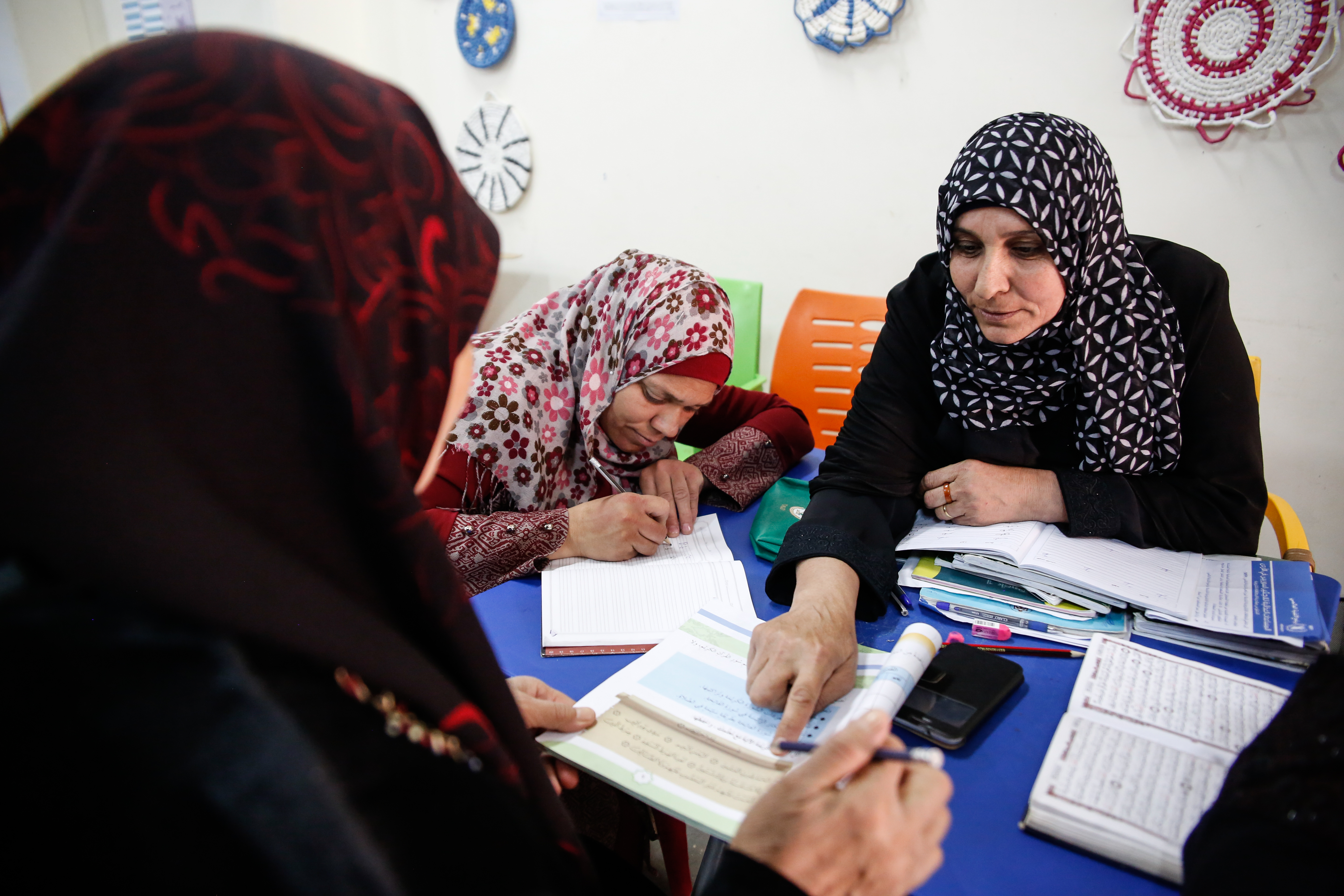 Falha Abrabo assists her students in one of the daily literacy lessons that she gives at the UN Women Oasis in Za’atari refugee camp. Photo: UN Women/Lauren Rooney

Most Syrian refugee women have been in Jordan for six or more years. The impact of displacement and their insecure life conditions as refugees has meant putting educational opportunities on hold. Through the UN Women Oasis, women are given the chance to access educational opportunities, which equip them with skills and knowledge they can use for personal and professional endeavours.

Falha is among the more than 300 women accessing livelihood opportunities in the three Oasis Centres in the Za’atari refugee camp, who are using their skills to better their lives and the lives of other refugees. “I want other refugees to know that being a refugee should not define who they are. You have survived conflict, lived through displacement, experienced heartache and, through all of that, you are still here. You are strong, never give up.” Read Falha’s story >

Located 90 km south of the Za’atari camp, nestled in arid land is the Azraq refugee camp. Established to accommodate the heightened influx of Syrian refugees in 2014, the camp hosts 35,752 inhabitants.5 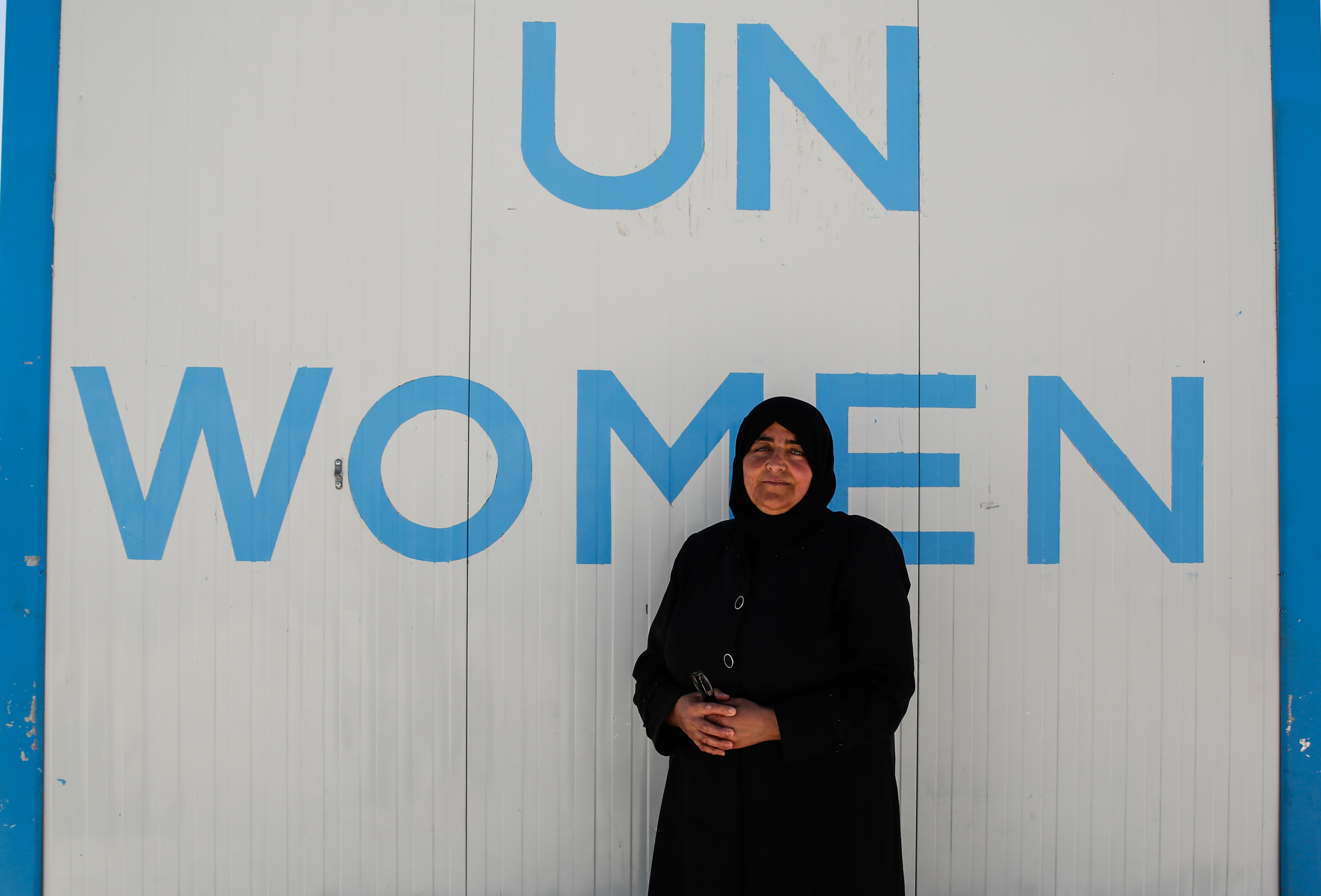 Fatima Alhaj, 50, is utilizing her passion for teaching at the UN Women Oasis to empower children and women to succeed. Photo: UN Women/Lauren Rooney

Fatima Alhaj, 50, fled from Aleppo to Jordan with her four children and her mother in 2016. “I could not live with the shooting, death, war and destruction anymore,” she explains. “Leaving everything I had behind; my dreams, my memories, my friends, and entering the unknown was one of the hardest decisions I have made.”

After the journey, Fatima began suffering from a chronic medical condition. Her condition frightened her because she feared she would never find work, and she had been the sole provider for her family for the past several years after her husband's death. Fatima had been a full-time teacher in Syria for over 17 years before coming to Jordan. 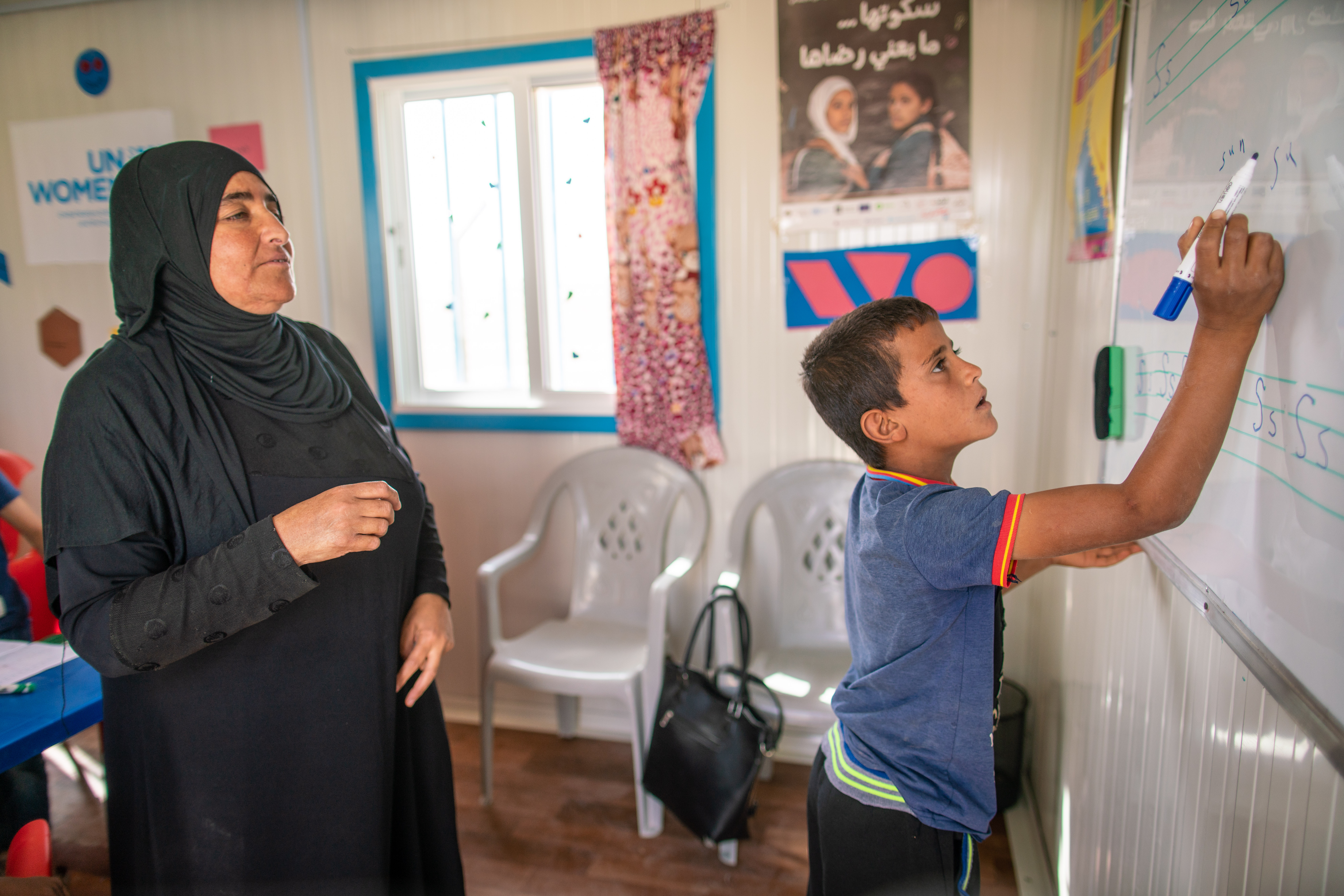 “When I saw that there was a teaching opportunity at the Oasis, I immediately applied,” Fatima says. “In Syria, when the school in Aleppo I taught at was bombed, I opened a classroom in my own home for up to 40 children. I would teach them three days a week and do it for free.”

Through the UN Women Oasis, Fatima is teaching up to 40 children Arabic and English literacy lessons on a daily basis. The incentive-based volunteer programme is enabling her to provide for her family economically, as well as improving her confidence and self-esteem via regular counselling services accessible through the centre. 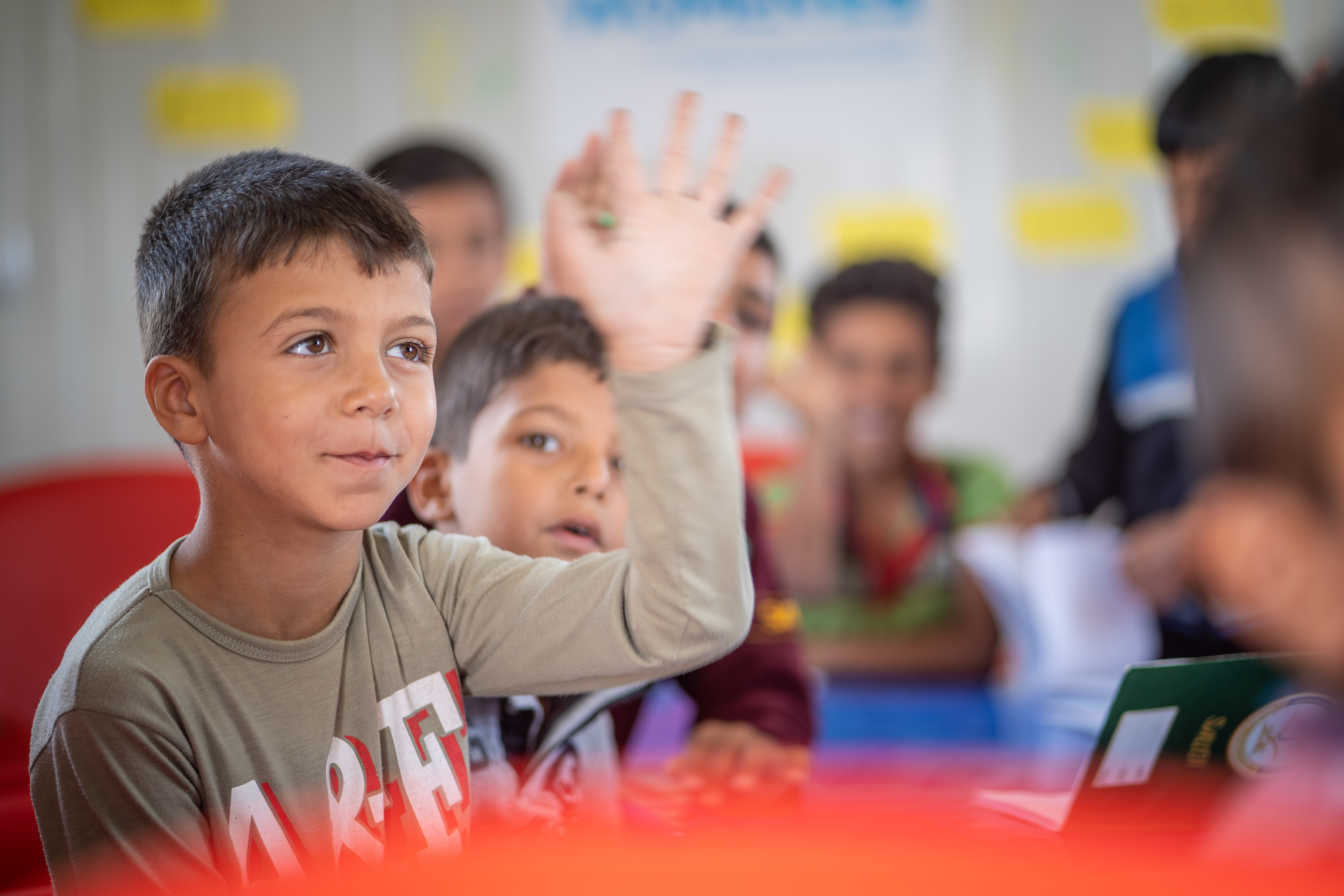 Now, Fatima has begun to utilize her literary skills as a means of catharsis. Through her poetry, she endeavours to tell her story and inspire others.

Excerpt from Fatima’s Poem; 'Becoming a Refugee': You who are awake

I am fed up with my soul

I am exhausted of my morning breath

I am exhausted of displacement and migration

And the toughness of existence and its urgency

I left my mourning homeland

Groaning of pain and hemorrhage

You who are awake

You have our profound gratitude

You who have brought joy

Doves of peace and security

You on the horizon waving

Promising that security is forthcoming

Sleep, my eyes, and have a rest

Here are the best companions

Who raised the sail of success

You are a success, you refugee, so listen

You are not alone in this.

[Click below to listen to Fatima narrate her poem, in Arabic] 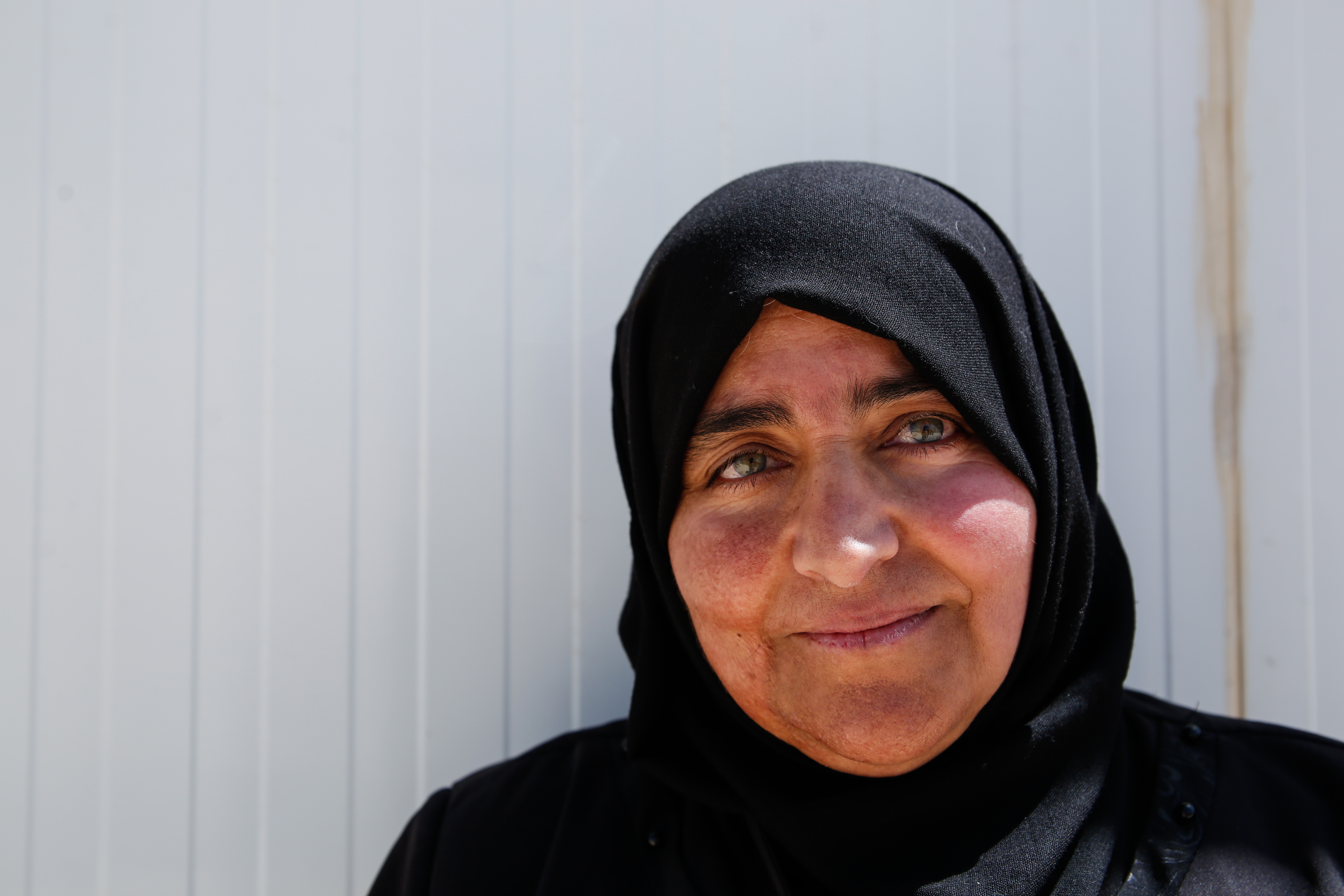 Fatima Alhaj is using her voice and writing as a way to empower other refugees. Photo: UN Women/Lauren Rooney

The UN Women Oasis opened in the Azraq refugee camp in 2018 and is providing 110 incentive-based volunteer positions to women as well as other direct services that promote the resilience and empowerment of women like Fatima. Read Fatima's story >

Approximately 84 per cent of Syrian refugees live in host communities in urban and rural areas of Jordan.6 Mona Ahmad Alqkla, 39, from Dara’a took the decision to leave Syria and move to the rural community of Karak when the conflict began. 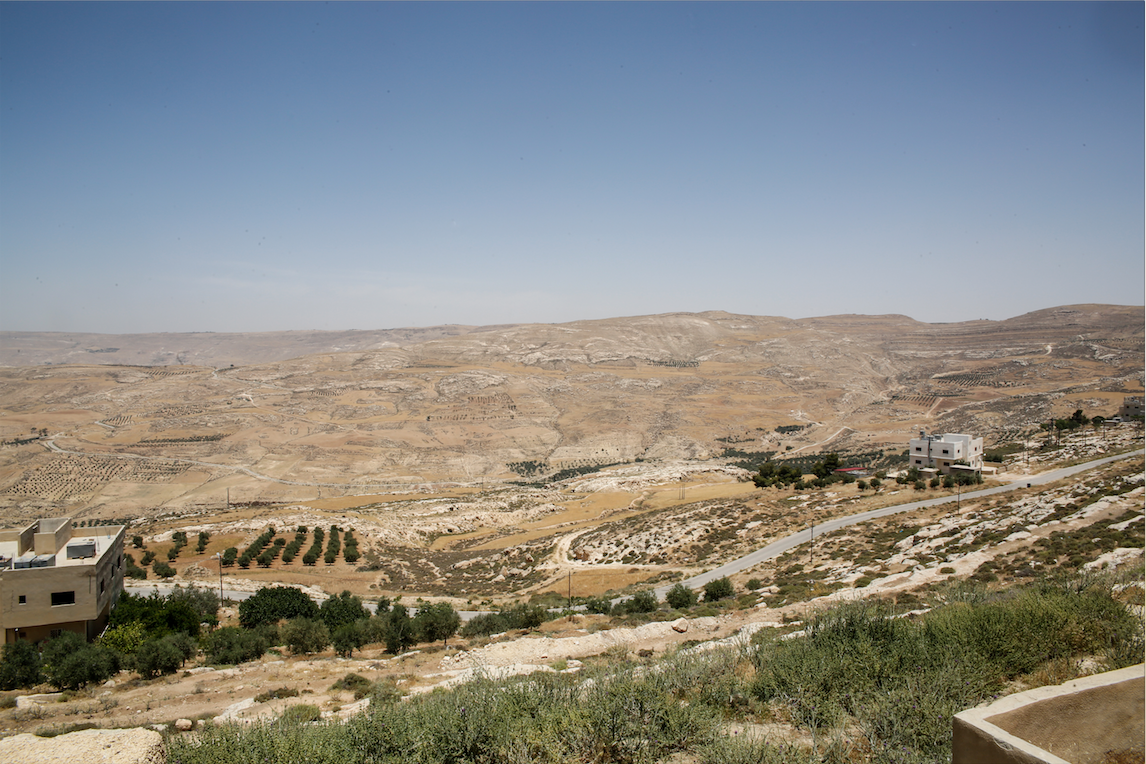 “War is hard to imagine unless you have lived through it,” she says, “I would never wish it on anyone. It was difficult to start a new beginning here when we did not know where to start.”

Mona and her family of nine have been living in Karak for the past seven years and in that time she has been unable to find work due to the lack of childcare and transportation services in the area.

“It is hard to find a job which can accommodate the needs of a woman and her family. My eldest daughter needs care due to her mental health, which meant I could never take a job that was far away,” she explains. 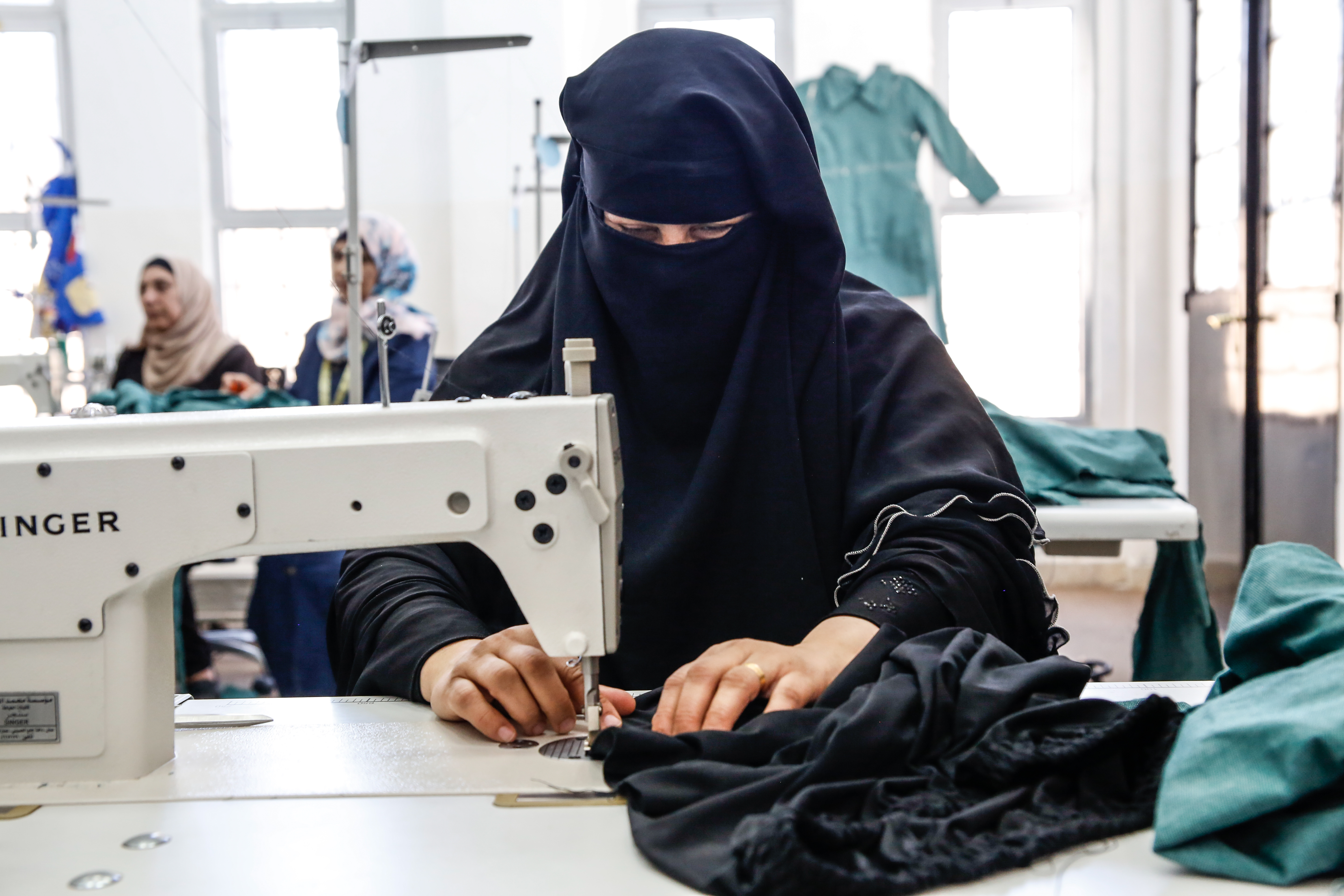 Mona Ahmad Alqkla, 39, is working as a tailor within the UN Women Oasis Centre in Taibeh. Photo: UN Women/Lauren Rooney

This year, Mona started the first job she has ever had as a tailor in the UN Women Oasis Centre in Karak. She is learning to sew children’s school uniforms that will be distributed to families who are unable to afford uniforms.

Through the Oasis programme and the services that it provides, I now have access to the childcare facilities, a transportation subsidy and I am able to earn for my family.”

“Many Syrian refugee women in my local neighbourhood think women should not work; however, after having this opportunity I want to show them that a woman can and should be able to provide for her family." 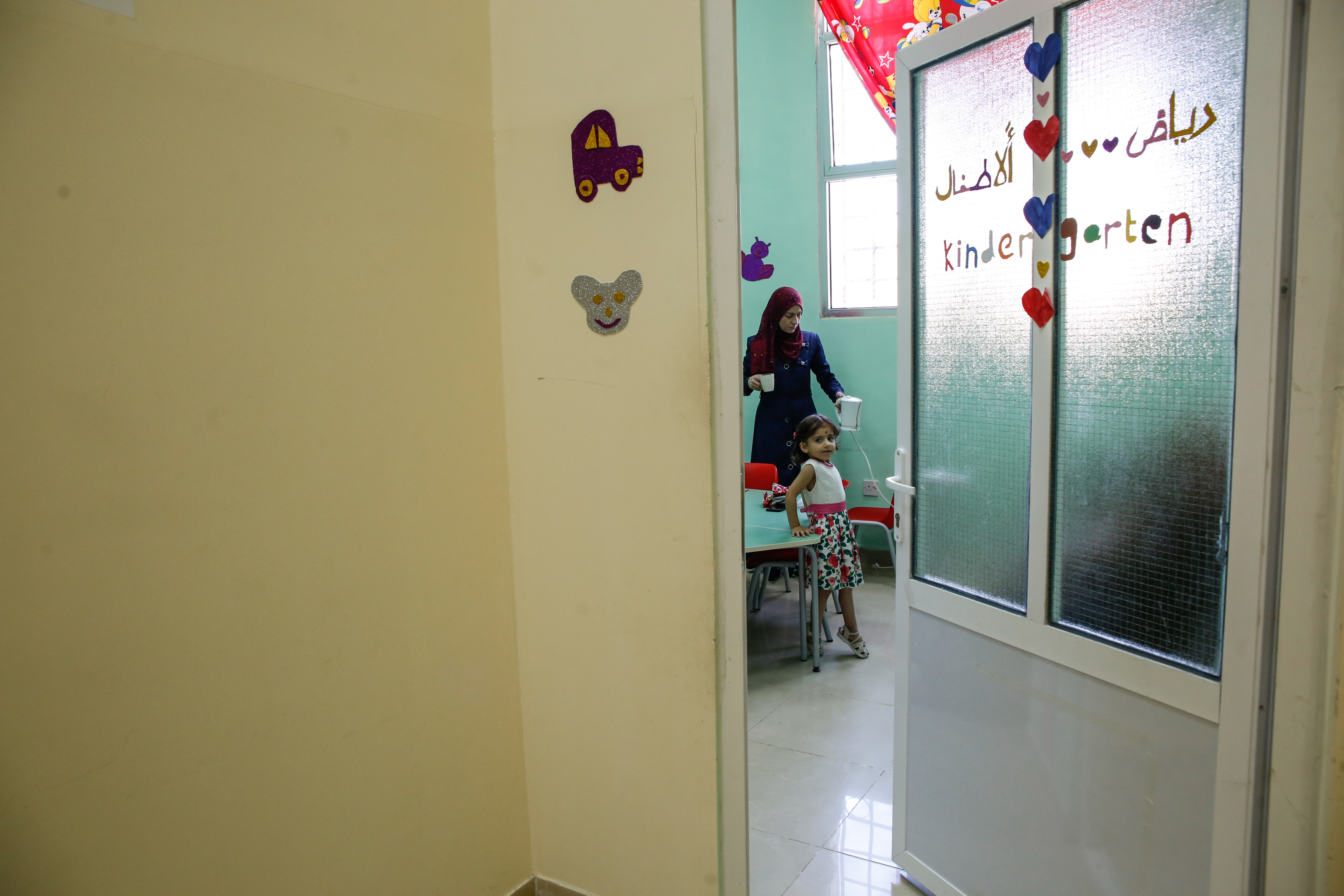 Each Oasis includes a childcare centre to support the women working both within and outside of the centre. Photo: UN Women/Lauren Rooney

Mona is one of 212 women benefiting from the new Oasis pilot centres set up in host communities. The Ministry of Social Development, in partnership with UN Women, launched the eight centres for vulnerable Syrian and Jordanian women to access livelihoods opportunities. The Oasis approach is a holistic one that addresses not only the immediate skills needed for economic participation but also the broader social challenges that prevent the empowerment of women and their entry in the labour market. 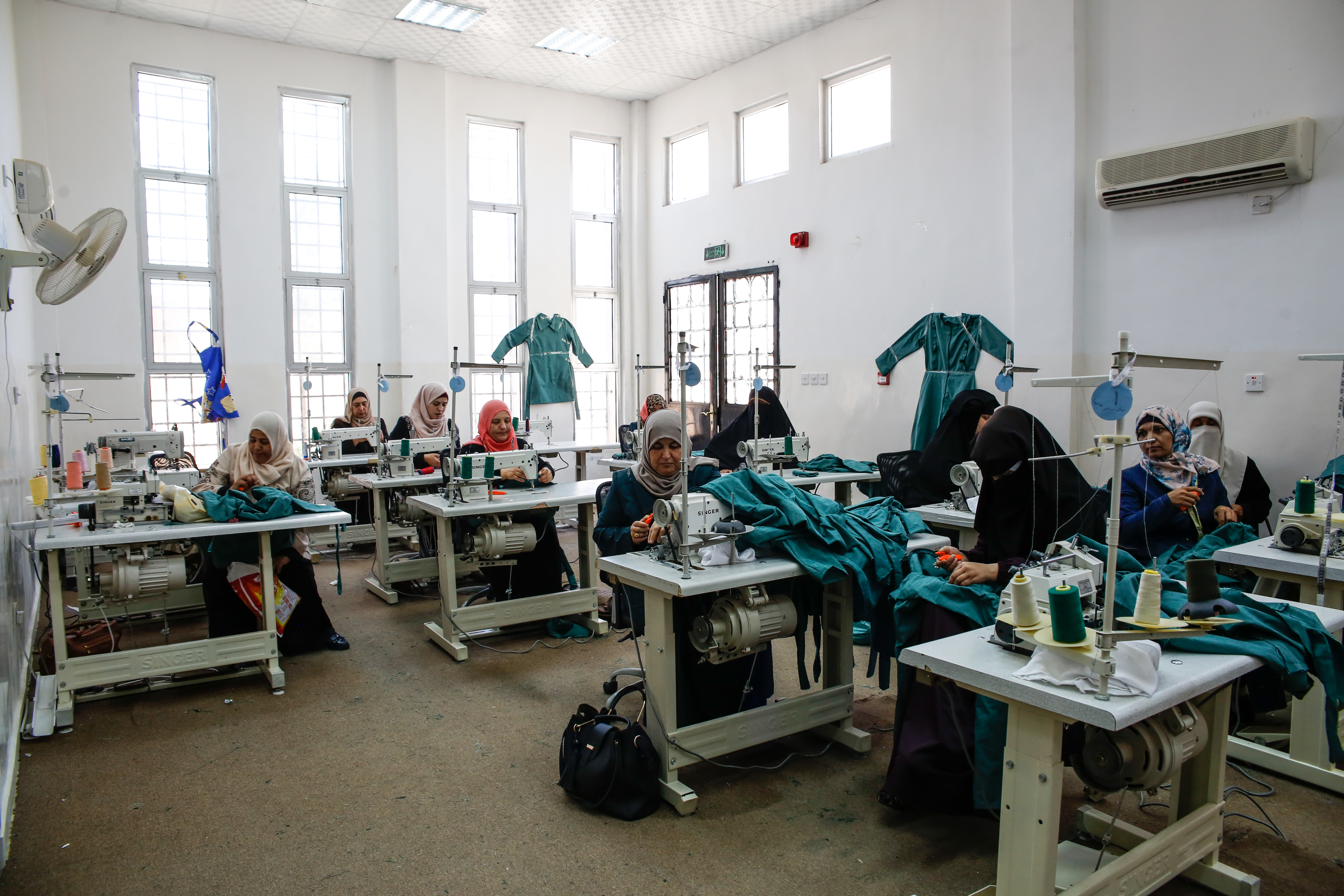 A scene from the ‘Oasis Centre for Resilience and Empowerment of Women and Girls’ operated by UN Women in the Taibeh Centre in the Karak governorate. Photo: UN Women/Lauren Rooney

“My dream is to open up my own tailoring business one day. And, now that I have the skills to do so, I have bought a sewing machine for my home and I am even teaching my husband how to sew. Perhaps one day we will have a family-owned shop.” Read Mona’s story >

The UN Women’s Oasis model is generously supported by the Governments of Australia, Finland, France, Iceland, Italy, Japan, the European Union through its Regional Trust Fund in Response to the Syria crisis (Madad Trust Fund), as well as from Zonta International Foundation.