Women are Key to Food Security in Rural Jordan 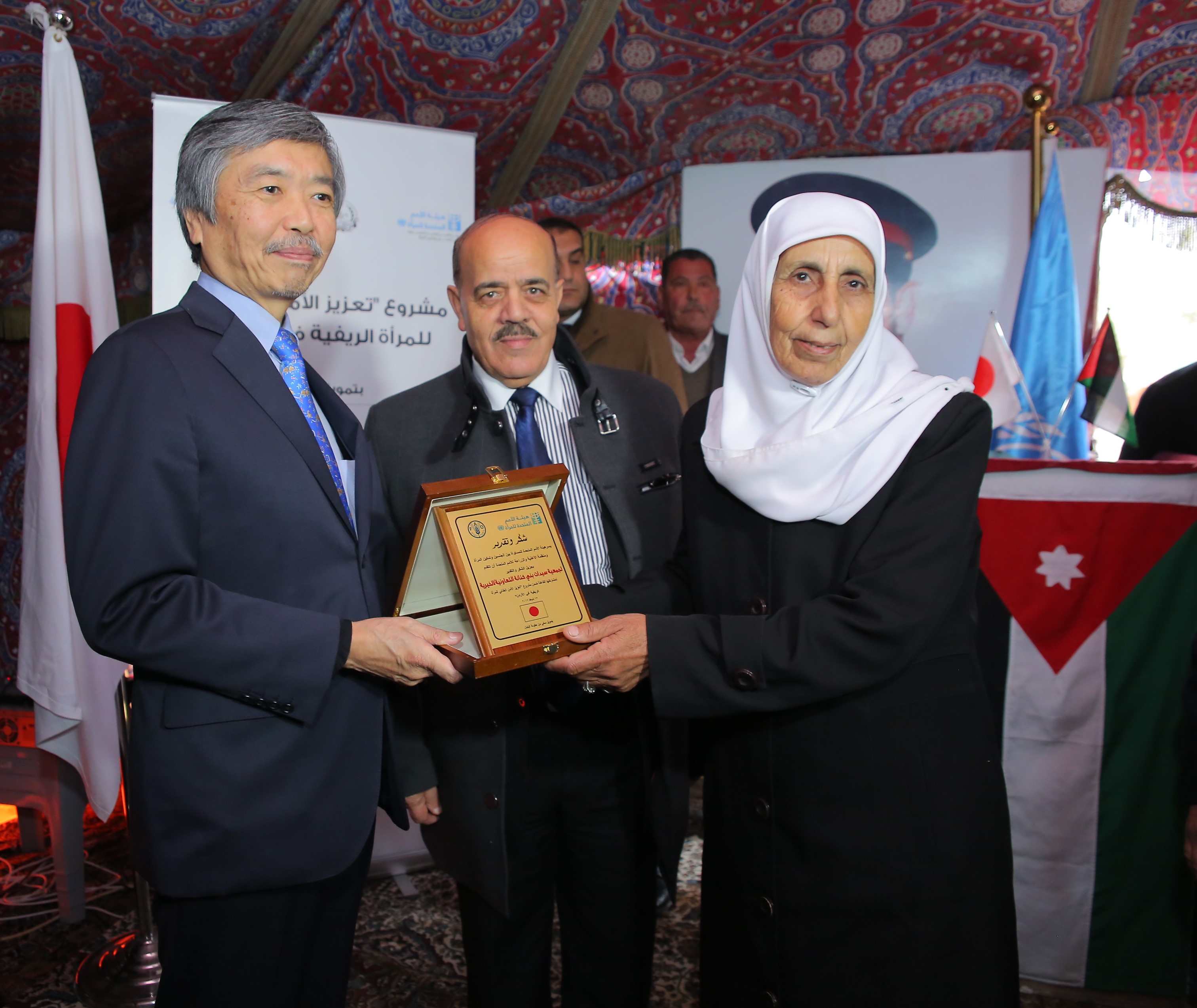 Irbid, February 13, 2017: Under the patronage of H.E. Minister of Agriculture Khaled Hneifat, UN Women and FAO organized an award ceremony recognizing the work of Community Based Organizations (CBOs) in Hobras village (Bani Kenana, Irbid governorate) in the implementation of the project ‘Promoting Rural Women’s Food Security in Jordan’. The ceremony was attended by a delegation representing the Japanese and Jordanian governments, that also visited the Bani Kenana Association for Women.

Under the $1.26 million, the project generously funded by the Government of Japan aims at supporting vulnerable Jordanians and Syrian refugees living in the rural areas of Jordan’s hosting communities to meet their food security needs, while also bolstering the role and conditions of women working in the agricultural sector.

A total of 555 women were trained on farming and using agricultural tools to sustain the food security of their families, benefiting 1,520 households (876 Jordanian, 644 Syrian refugees). The project also worked to empower 200 rural women to advocate for better working conditions and leadership positions within rural and agricultural governance structures.

After the award ceremony, the delegation visited an exhibition featuring samples of homemade food products made by women living in rural areas. They were also briefed by a local female beneficiary who created a house garden to increase her family’s access to micro-nutrients.

During the visit, Japanese Ambassador to Jordan, H.E. Shuichi Sakurai, said: “Women are still facing unequal status in the society, and research studies have shown that a lot of women, especially in the rural areas, face food-insecure condition and are poorly included in the community’s decision-making process. Therefore, last year, the Government of Japan provided approximately 1.3 million USD to UN Women to implement the project which aims at supporting rural women’s food security and rights in their societies at Irbid and Zarqa governorates.”

For his part, FAO Special Representative in Jordan, Mr. Naserdin Haj Amin said: “This joint cooperation was born out of a joint belief in the importance of supporting rural women’s access to livelihood opportunities and decent income which come as key to supporting their food security and resilience. To this belief, our project teams had ensured that the project worked to address food insecurity in Jordan while also bolstering the role and conditions of women working in the agricultural sector.”

Related News
05/03/2017
UNESCO - UN Women Joint Programme - Hospitality trainings
20/10/2022
UN Women and GIZ, in collaboration with the Ministry of Labour, launch report on the impact of COVID-19 on the economic participation of women in Jordan
18/09/2022
From Where I Stand: “Looking forward, the most important thing for me is to keep growing and learning.”
31/08/2022
MINISTER OF FOREIGN AFFAIRS OF NORWAY, H.E. MS. ANNIKEN HUITFELDT, VISITS PSD IN AMMAN
19/08/2022
From Where I Stand: “Keep trying, once, twice, three times or more, as needed. The experience is worth it.”
END_OF_DOCUMENT_TOKEN_TO_BE_REPLACED