UNDER THE PATRONAGE OF THE PRIME MINISTER: LAUNCH OF THE IMPLEMENTATION OF JORDAN NATIONAL ACTION PLAN ON UNSCR 1325 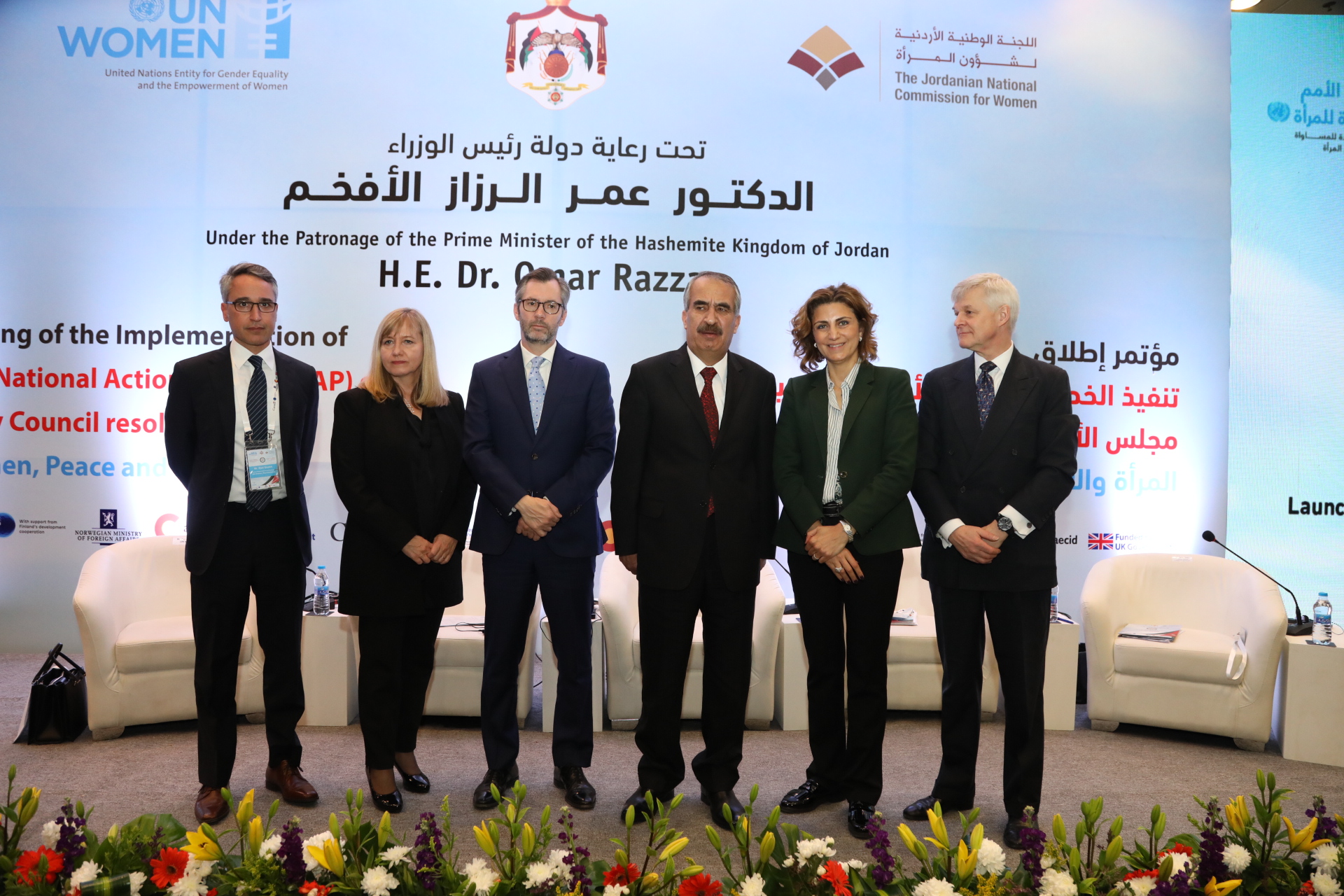 On behalf of the Prime Minister of the Hashemite Kingdom of Jordan, H.E. Dr. Omar Al-Razzaz, the Minister of Interior, H.E. Mr. Samir Moubayed, launched the implementation of Jordan’s National Action Plan on UN Security Council resolution 1325 (JONAP) on Women, Security and Peace during a national conference organized by Government of Jordan and UN Women, in partnership with the Embassies of Canada, Finland, Norway, Spain, and the United Kingdom (Dead Sea, 6-7 February 2019).

H.E. Mr. Sameer ALmobaideen, Minister of Interior,  affirmed the political commitment of the Jordanian Government to implement the plan in terms of allocation of budgets within the executive plan of the relevant security and government institutions and adopting a mechanism to follow up on the implementation of the plan through the Higher Steering Committee and the Inter-Ministerial Committee for the Women’s Empowerment delegating The National Committee for Women's Affairs to prepare follow-up reports in cooperation with the National Coalition to implement the resolution.

The main objective of the initiative is to prepare partners for implementation and promoting a joint understanding on roles and responsibilities as well as raising awareness of the accountability framework. National stakeholders, including representatives of government, civil society, media and youth organizations, took the opportunity to exchange lessons, best practices and strengthen their collaboration and partnerships.

The conference also shared Jordan’s experience with regional stakeholders on the inclusive process of developing the NAP as well as its financing mechanism. Experiences and expertise were shared with other countries in the region that are working on implementing UNSCR 1325, including Palestine, Lebanon, Iraq, and Tunisia.

“Jordan has demonstrated leadership and ownership over the WPS agenda and recognized its clear relevance to the security issues the Kingdom is currently addressing. As international partners we are pleased to stand with the Government of Jordan in these efforts and through the JONAP pooled fund to ensure our support is provided in a coordinated and harmonized manner; that it reflects national priorities; and that it promotes a holistic approach to implementation across all four pillars of the plan.” affirmed Members of the JONAP Pooled Fund Donor Consortium: Canada, Finland, Norway, Spain, United Kingdom

During the conference, participants organized themselves into working groups structured around important cross-cutting themes under the JONAP: technical assistance; data collection; and advocacy and awareness raising.  The outcomes of the working group discussions will serve as reference documents for the technical working group of the JONAP coordination structure during the implementation phase.

“National Action Plans increase public awareness of Women, Peace and Security commitments, catalyze institutional acceptance, and serve as accountability frameworks. Jordan’s experience in drafting and implementing its National Action Plan can serve as a valuable model for other countries and one that UN Women will support in sharing widely” affirmed Paivi Kannisto, Chief of Peace & Security Section and Director of Policy a.i., UN Women.

The Government of Jordan endorsed JONAP in December 2017 and formally launched it in a ceremony in March 2018. The overall goal of the JONAP is to contribute to Jordan’s stability and security by improving operational security responses, as well as ensuring that the framework through which Jordan approaches peace and security issues recognizes the specific needs of women and their human rights. The JONAP consists of four strategic goals in the areas of:

Related News
27/10/2019
From where I stand: “It’s time to empower women and ensure their participation in peace and security processes”
28/04/2020
Using technology to assist vulnerable Syrian refugees during COVID-19 lockdown
10/05/2018
Finland Minister for Foreign Trade and Development greets Syrian women and children in Azraq UN Women Oasis
21/03/2018
Stakeholder's celebrate the launch of the Jordanian National Plan to activate UN Security Council Resolution 1325 on Women, Peace and Security
20/06/2019
From where I stand: “I have the eternal belief that education is the nucleus of empowering communities”
END_OF_DOCUMENT_TOKEN_TO_BE_REPLACED