Meet the Syrian women baking up new confidence and preparing healthy meals to 29,000 children every day

The smell of freshly baked pastries lingers in the air of the HealthyKitchen in the Azraq refugee camp. Leena Ahmed Al-Faraj, 25, a Syrian refugee from Der Zoor, has just finished her six-hour shift, baking healthy meals that will be packaged and distributed to 10,000 children in the six schools of the Azraq camp.

"I have been working in the kitchen for five months, and in that time, I have learned so much, from baking bread and pastries to building my confidence and independence," Al-Faraj explains. "It is the first job that I have ever had, and it has made me feel incredibly empowered to be the sole provider for myself and my one-year-old baby." The Azraq camp is home to 36,657 Syrian refugees, and 1 in 4 households are headed by women1. 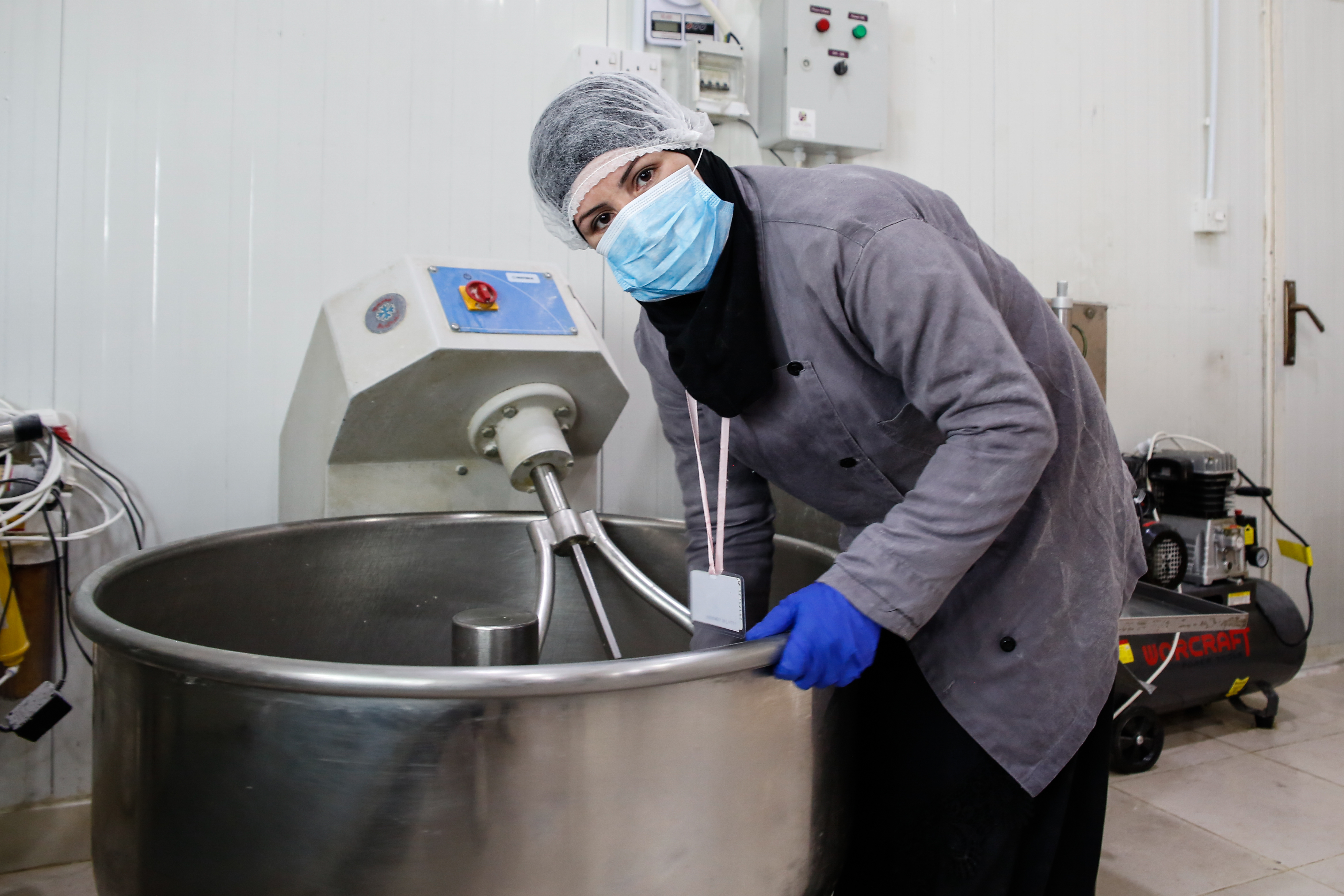 To support women like Al-Faraj, UN Women works in partnership with the Government of Australia and the World Food Programme (WFP) to provide 400 vulnerable Syrian refugee women every month with livelihood and skills building opportunities at the WFP-run Healthy Kitchens in the Azraq and Za’atari refugee camps.

"I feel blessed to be one of the people giving back to the community and provide children with these healthy snacks," says Al-Faraj. More than 29,000 children in the Azaq and Za’atari refugee camps are receiving healthy school snacks every day, which comprise of a freshly baked pastry complemented with a piece of seasonal fruit and cucumber, which has high nutritional value and a consumption of 300 calories.

Rascha Ahmen Al Naser, 35, arrived in Azraq refugee camp five years ago from Daraa Syria. Like Al-Faraj, she is the sole provider for her family of six. Al Naser works alongside Al-Faraj as a Packager in the 'Healthy Kitchen', preparing the assortment of healthy snacks. For both Al Naser and Al-Faraj, childcare was a major obstacle holding them back from seeking job opportunities. 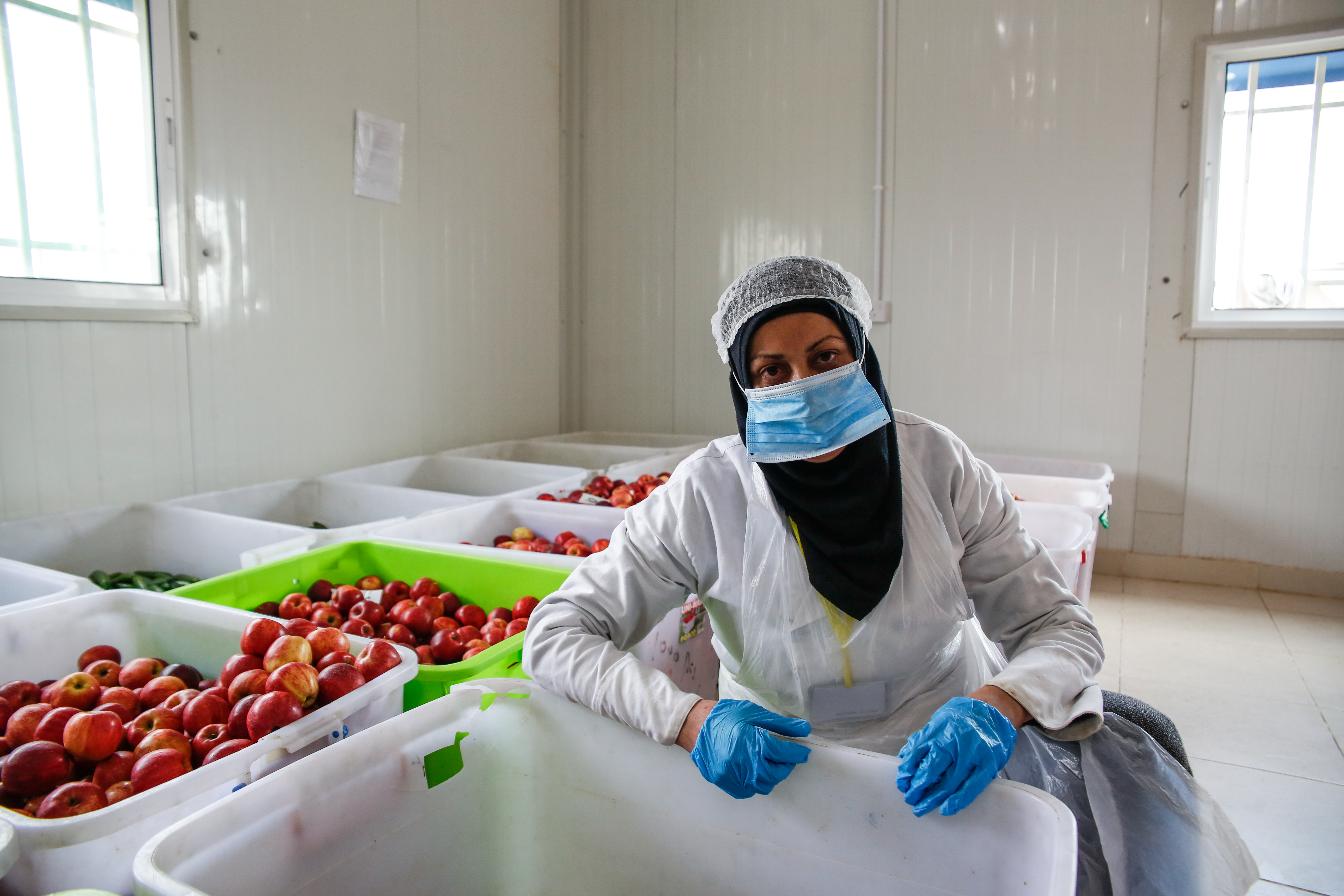 To address this challenge, UN Women is providing childcare services and access to nursing hours from 6am to 6pm to the 'Healthy Kitchen' workers through its Oasis centers, where children can also receive support with their homework and attend other educational activities. In Azraq refugee camp, Al Naser and Al-Faraj access the childcare services provided in the Oasis centers, where they both leave their children throughout their working hours.

"The childcare services helped me to get a job," says Al Naser. "I feel comfortable in knowing that my son is close by, in a safe space, and that I can feed him when needed."

Women now make up 68 per cent of the 'Healthy Kitchens' workforce thanks to UN Women’s awareness raising efforts and support services, including protection and counselling, for workers. The community engagement initiatives reached women like Thaqla Salameh Al Shohedah, 51, a Syrian refugee from Homs, who lost her husband during the war and was alone and without any source of income in the camp.

"I work as a cleaner in the kitchens. The kitchen changed my life, mostly financially, but it certainly improved my happiness," said Al Shohedah. "My life is very different now than it was two years ago. I am financially stable, I have paid off my debts, brought myself a television, and even found people I can call family now”. 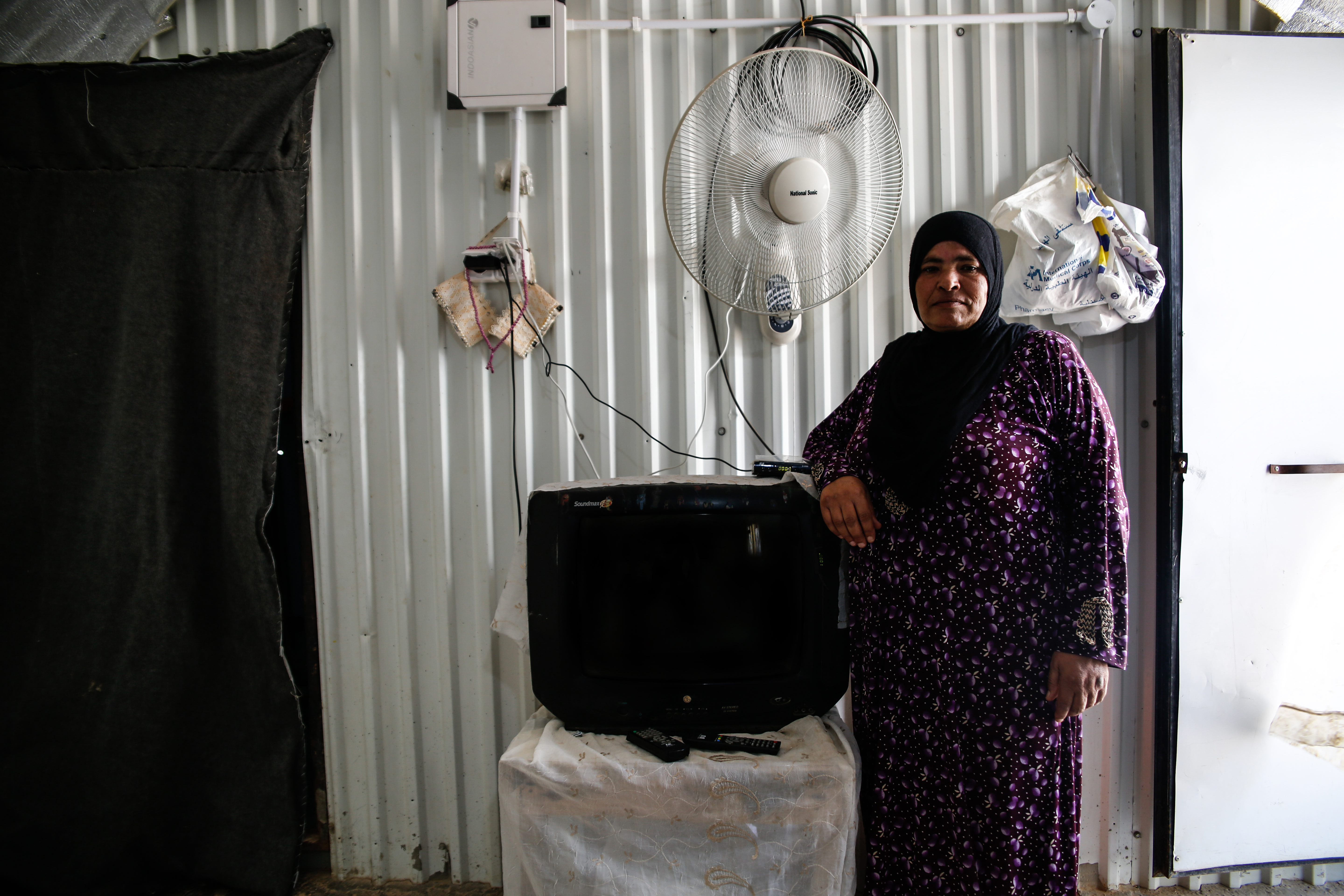 Through working in the HealthyKitchen, Thaqla Salameh Al Shohedah, 51, can now support herself financially. She poses with a television she brought herself after paying off all of her debts. Photo: UN Women/ Lauren Rooney
Related News
02/07/2020
Follow our history: Ten years into advancing gender equality and women’s empowerment in Jordan
18/06/2020
From where we stand: Our journey of resilience and empowerment between two crises.
17/06/2020
From where I stand: “My husband would not allow me to leave the house, now I’m financially independent”
12/03/2020
International Women’s Day 2020: sparking intergenerational dialogue through movies and taking a stand in self-defense sessions
20/06/2019
Photo essay: Syrian women in Jordan share stories of war and hope
END_OF_DOCUMENT_TOKEN_TO_BE_REPLACED