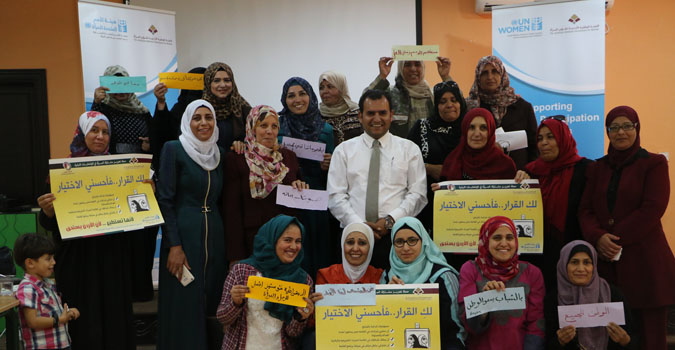 The training sessions were carried out by JNCW with the support of UN Women in collaboration with the Al Hayat Center for Development (RASED). A total of 114 potential women candidates were trained in the four targeted governorates and were divided as follows: 23 women were trained in Karak governorate, 36 women in Zarqa Governorate, 36 women lady in Mafraq Governorate and  last but not least, 19 women in Irbid Governorate. Potential women candidates were trained on several specialized concepts which aimed to raise the level of their knowledge of mainstreaming gender while drafting their electoral manifesto.

The training sessions also highlighted the most important international conventions on women's rights. In addition to that, potential women candidates were familiarized with the national priority list of demands and reforms of JNCW and other women’s organizations in political and legislative fields. Potential women candidates analyzed the list of demands in accordance to priorities of their own governorate where they, therefore, adopted several demands and priorities from the list that correspond to the needs of their governorates.

Potential women candidates pledged to further include part or all of the demands and priorities of the national political and legislative list into their own electoral manifesto and pay as much efforts to achieve those demands in case they won the elections.

JNCW  had also ended intensive training for potential women candidates on the electoral process and media campaign management , in order to empower them under administrative and media framework relating to the electoral process.  In addition, technical assistance will be available for a month through experts in order to provide legal, media and campaign consultations to women candidates. Experts will be based at Princess Basma’s centers in the governorates of Irbid, Mafraq, Zarqa, Karak providing consultancy on daily basis. Moreover, hotline services is available 24/7 in the targeted governorates up until the Election Day.

The Jordanian National Commission for Women (JNCW) with the support and collaboration of UN Women/United Nations Entity for Gender Equality and the empowerment of women with the generous support provided through the Women in Politics Fund, funded by the Swedish Cooperation Development Agency, is working on the implementation of the project empowering potential candidate women actual women candidates in the upcoming parliamentary elections in each the governorates of Irbid and Zarqa , Karak, and Mafraq. The project also includes two phases: pre-list candidacy formation with potential candidates, and post-list candidacy with final lists of candidates.

Related News
21/03/2018
Stakeholder's celebrate the launch of the Jordanian National Plan to activate UN Security Council Resolution 1325 on Women, Peace and Security
24/05/2016
UN Women empowers women in public service to access leadership positions
20/10/2022
UN Women and GIZ, in collaboration with the Ministry of Labour, launch report on the impact of COVID-19 on the economic participation of women in Jordan
18/09/2022
From Where I Stand: “Looking forward, the most important thing for me is to keep growing and learning.”
31/08/2022
MINISTER OF FOREIGN AFFAIRS OF NORWAY, H.E. MS. ANNIKEN HUITFELDT, VISITS PSD IN AMMAN
END_OF_DOCUMENT_TOKEN_TO_BE_REPLACED