Commemorating the 16 Days of Activism Against Gender-Based Violence 2018 Campaign, in Jordan. 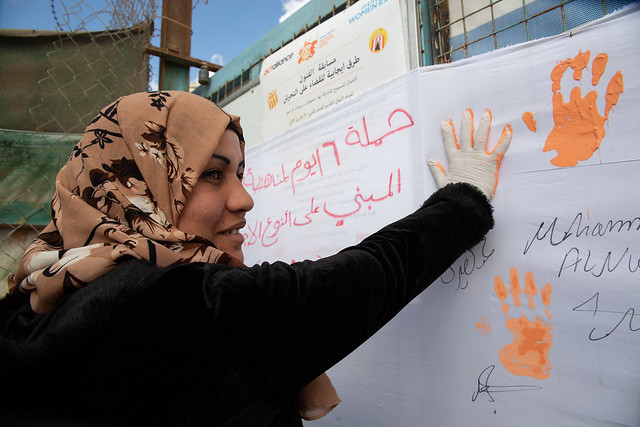 This year, UN Women Jordan, partners, NGO’s, CSO’s and Jordanian citizens joined together to inspire social mobilization through a host of public events and activities in the country for the 16 Days of Activism Against Gender-Based Violence Campaign under the theme "Speak Up… Harassment is a Crime.”

The 16 Days of Activism against Gender-Based Violence is an international campaign which takes place each year and runs from 25th November, the International Day for the Elimination of Violence against Women, to 10th December, Human Rights Day. During the 16 days, over 300 dedicated awareness-raising activities and related initiatives were organized across Jordan.

The 16 Days of Activism Against Gender-Based Violence campaign included the release of a study undertaken by the Jordanian National Commission for Women, entitled "Sexual Harassment in Jordan.” The study comes in the context of the Jordanian National Commission for Women efforts to provide data and information that can contribute to a better understanding of the different forms and realities of gender-based violence in Jordan. The study further aims at assessing the level of social awareness of the definition and manifestation of gender-based violence and social trends towards such practices, which would guide efforts to prepare needed strategies and plans; launch and direct awareness and media campaigns to address the root causes of the multi-faceted forms of gender-based violence, create a zero-violence-tolerant environment and adopt legislation, mechanisms, and measures to confront it.

UN Women Representative, Mr. Ziad Sheikh, affirmed that ‘We need to confront harmful social norms and amplify the voices of women and girls who have suffered such violence in silence. To achieve this, we need support from civil society organizations and youth, as well as strong international partnerships for change.’

The 16 Days of Activism against Gender-Based Violence is an international campaign, was originated by activists at the first Women's Global Leadership Institute in 1991 and is coordinated each year by the Center for Women's Global Leadership. In support of this civil society initiative the 16 Days of Activism, under the leadership of the UN Secretary General, António Guterres, the United Nations Secretary-General’s UNiTE to End Violence against Women Campaign (UNiTE), calls for global action to increase awareness, galvanize advocacy efforts and share of knowledge and innovations.