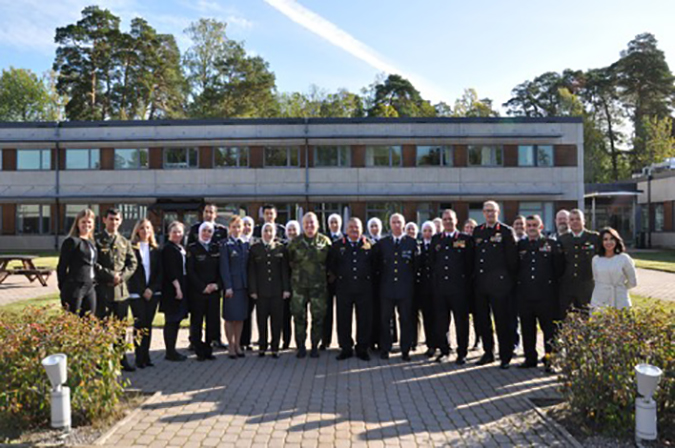 The UN Women Jordan Country Office, in partnership with the Nordic Center for Gender in Military Operations (NCGM), organized a study visit for representatives of Jordan’s Security Sector Agencies to Sweden (Stockholm, 22-27 September 2019), in order to share best practices in integrating gender perspectives into security sector’s operations, tactics and strategies. Headed by Brigadier General Aiman Najeib Madanat, Assistant for Operations and Training in the Directorate of Civil Defence, the Jordanian delegation encompassed 8 female and 8 male members from Jordan Armed Forces, the Public Security Directorate, the General Directorate of the Gendarmerie and the Directorate of Civil Defence, as well as a representative from the Jordanian National Commission for Women.

On their first day in Stockholm, Jordan security sector representatives were introduced to NCGM’s gender mainstreaming policy by its commander, Colonel Laura Swaan Wrede. LtC Peter Östman, the newly appointed Head of NCGM, also addressed the delegation to present the Center’s vision and expertise in the integration of gender and military aspects, including through the provision of certified trainings for member states of the North Atlantic Treaty Organization (NATO). “Jordan has made a long way towards integrating gender perspectives into security sector. Security sector agencies’ cooperation with UN Women is very inspiring and I hope this study visit will set a foundation for further developments” he affirmed.

Throughout the four-day visit, security sector representatives had the opportunity to exchange best practices on gender mainstreaming in military and police operations as well as on the importance of integrating gender into pre-deployment trainings, including the role and tasks of a gender advisor deployed in peacekeeping operations. “Gender is essential for military effectiveness and to do the operations. Gender analysis is a tool for operational planning process to consider the different factors from women and men”stated Maj. Per-Roe Petlund from NCGM. 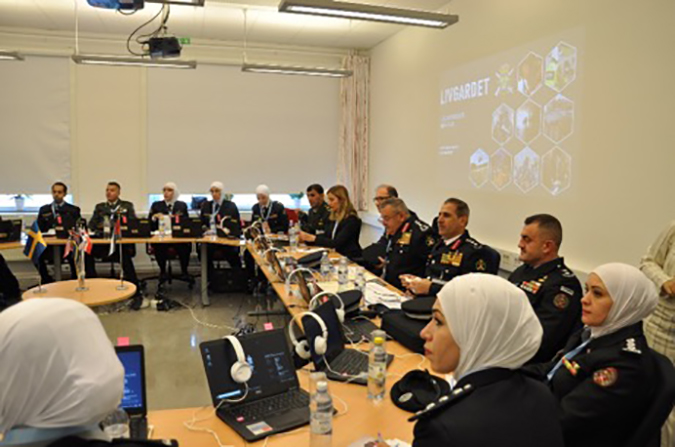 The Jordanian delegation also held meetings at the Swedish Ministry of Defense, the Swedish International Development Cooperation Agency, the Swedish Armed Forces, the Swedish Police, and the Stockholm International Peace Research Institute, to discuss how the security and military sectors can integrate comprehensive gender-responsive policies and practices which are inclusive of the Women’s Peace and Security (WPS) agenda.

In view of the upcoming commemoration of the 20thanniversary rel="noopener noreferrer" of the adoption of UN Security Council Resolution 1325 on WPS in 2020, the delegation discussed accountability and reporting mechanism for 1325 National Action Plans with counterparts at the Swedish Ministry of Foreign Affairs, thus highlighting the importance of sustaining political support towards the advancement of the WPS agenda globally. Leading up to this anniversary, and as one of the main outcomes of the visit, participants discussed the opportunity of organizing a Key Leaders Seminar on WPS in Jordan in cooperation with the NCGM. 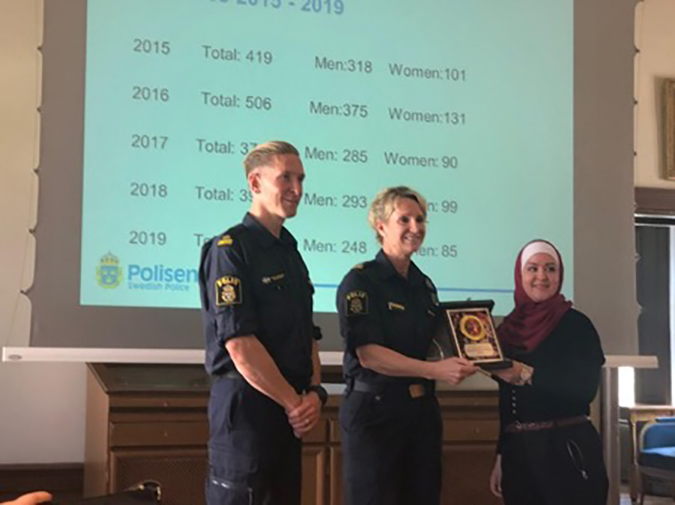 Supported by the Governments of the Canada, Finland, Norway, Spain, and the United Kingdom, the study tour was organized under the framework of Jordan’s 1325 NAP 2018-2021 (JONAP) and its specific objective on strengthening institutional capacity development on WPS issues and gender responsive Security Sector Reform.

Related News
02/07/2020
Follow our history: Ten years into advancing gender equality and women’s empowerment in Jordan
12/03/2020
International Women’s Day 2020: sparking intergenerational dialogue through movies and taking a stand in self-defense sessions
31/07/2019
Mentoring programme pairs budding Syrian and Jordanian entrepreneurs
31/07/2019
From where I stand: “The key to my success was taking away the shame of asking others for help”
31/07/2019
From where I stand: “I am far more confident at the prospect of beginning the process”
END_OF_DOCUMENT_TOKEN_TO_BE_REPLACED